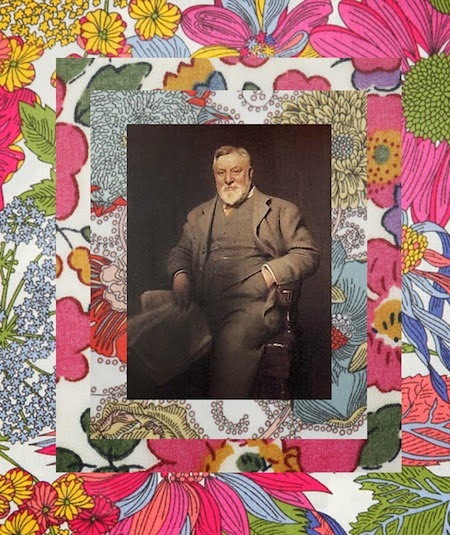 Arthur Lasenby Liberty was born in Chesham, Buckhamshire 1843. He was employed by Messrs Farmer and Rogers in Regent Street in 1862, the year of the International exhibition at Kensington in London. By 1874, inspired by his 10 years of service, Arthur decided to start a business of his own, which he did the next year.

With a £2,000 loan from his future father-in-law, Arthur Liberty accepted the lease of half a shop at 218a Regent Street with only three staff members.
The shop opened during 1875 selling ornaments, fabric and objets d'art from Japan and the East. Within eighteen months Arthur Liberty had repaid the loan and acquired the second half of 218 Regent Street. As the business grew, neighbouring properties were bought and added.

In 1885, 142–144 Regent Street was acquired and housed the ever-increasing demand for carpets and furniture. The basement was named the Eastern Bazaar, and was the vending place for what was described as "decorative furnishing objects". He named the property Chesham House after the place in which he grew up. The store became the most fashionable place to shop in London and Liberty fabrics were used for both clothing and furnishings. Some of its clientele was exotic, and included famous Pre- Raphaelite artists.

In 1884 Liberty introduced the costume department into the Regent Street store, directed by Edward William Godwin (1833–86). Godwin was a distinguished architect. He was a founding member of the Costume Society in 1882. He and Arthur Liberty created in-house apparel to challenge the fashions of Paris.

In November 1885, Liberty brought forty-two villagers from India to stage a living village of Indian artisans. Liberty's specialized in Oriental goods, in particular imported Indian silks, and the aim of the display was to generate both publicity and sales for the store. However, it was a disaster commercially and publicly, with concern about the way the villagers were put on display.

During the 1890s Arthur Lasenby Liberty built strong relationships with many English designers. Many of these designers, including Archibold  Knox , practised the artistic styles known as Arts and Crafts and Art Noveau, and Liberty helped develop Art Nouveau through his encouragement of such designers. The company became associated with this new style, to the extent that in Italy, Art Nouveau became known as the Stile Liberty, after the London shop.
The store became one of the most prestigious in London.

This is the history of the this beautiful store and I was lucky enough to go there last week whilst I was in London.  When you arrive at this most stunning place, even before you walk through the doors, the beauty is outstanding. 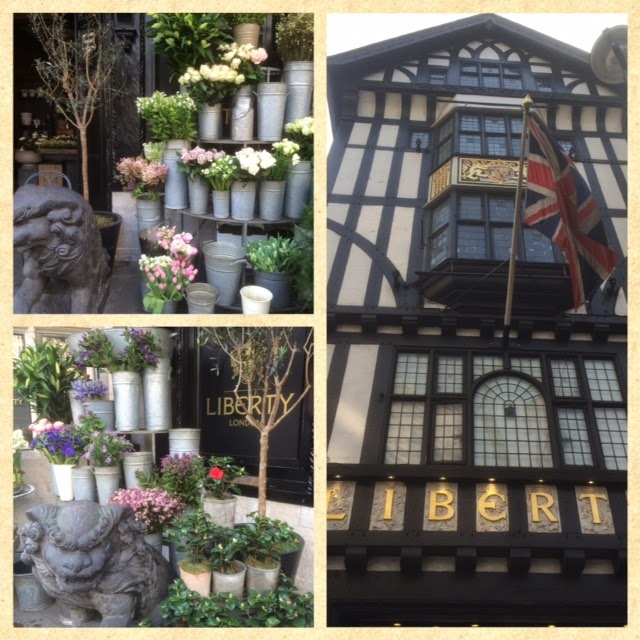 The building is the most lovely Tudor and there is a flower shop at the entrance which fills it with the most beautiful heady scents of flowers.  People who have never been there before stand staring at it and clicking cameras.... You have to say it it the most beautiful store in the city!

I knew where I was heading but first I made my way to the centre of the building near the stairs.  There, as some of you who have been will know, is a gallery ( that is to say it is a sort of galleried stair case.  As you climb and go on to a floor you can look down or up) 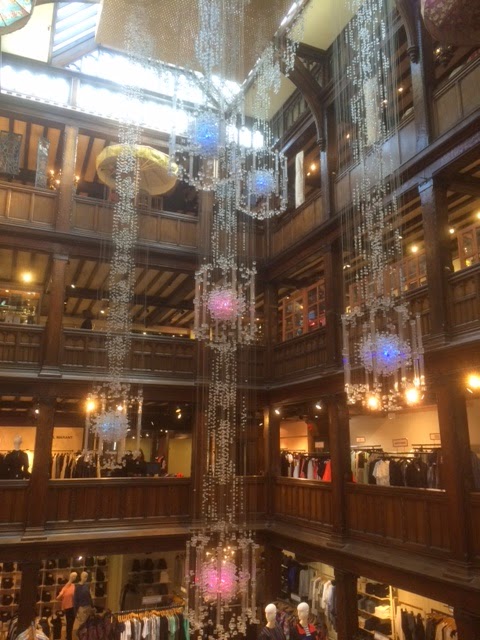 If you can get near enough you can look up and down all the floors and the light shines through this magnificent store.  For people going forH the first time you can see their faces with delight and awe, the thing is, people who have been lots of times do exactly the same.... I could sleep there!

I prefer walking up and down the regal stair case than going in the lifts, you get to see all the glorious wood and displays as you climb....

I was heading for the Haberdashery department (surprise surprise!) and it is situated on the third floor at the back of that floor. 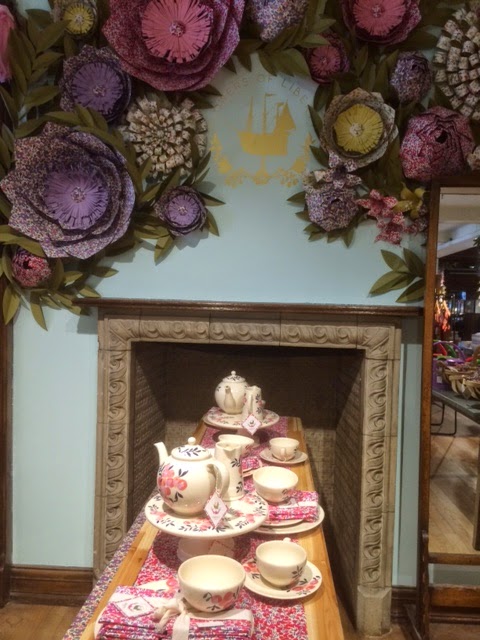 As you walk along there is china and the bath store ( bubble baths and lotions) and the most beautiful fireplaces are still in the store and used as a back drop for displays..


The beauty of this place is outstanding, you have to stop and look as you go along.  This place is not a quick in and out kind of store but a stop and linger in utter adoration at the beauty and artistic displays.

I made my way to the Haberdashery department and wandered around all the beautiful floral fabrics, buttons, books, scissors, pins and so much more. 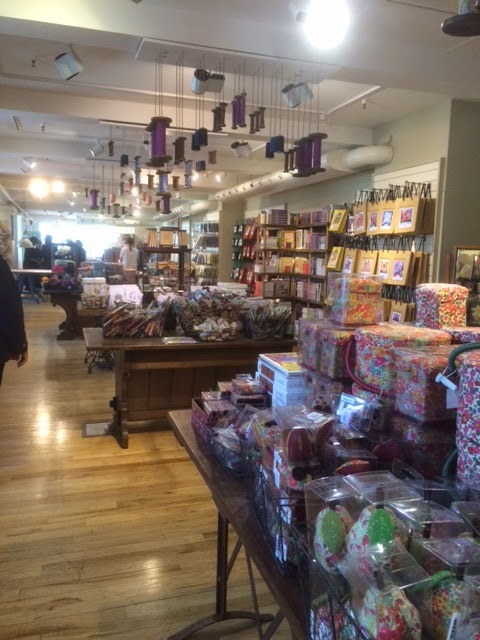 I am a great fan of some of the designs of William Morris  and in Liberty they still produce some of these.  I bought a metre of one of those to make something with ( do I know what? no is the answer but it will be a blind or something!)

I also purchased some rather beautifully made bias binding in the most stunning floral fabric... I kept picking it up and in the end it just came home with me.  Probably to line some vintage linen and a bit of hand embroidery in the middle and there we have a panel for a cushion for our bed ( not that it needs more but I do swap and shop them around in the seasons!)


I had such a wonderful few hours wandering round the departments and I did linger in the stationery department and bought a beautiful tin of stickers called Flora and Fauna.  Another passion of mine is writing (hand writing with my calligraphy fountain pen) and I correspond with several people regularly in this way.  I love to write nicely and pop some beautiful stickers on there and draw little sketches.  There is something about a hand written letter dropping through your letter box, making a warm drink and curling up in a chair and reading it...... ( so much better than emails and texts!)  Do not get me wrong I have embraced technology and it is instant, but somehow friendships deserve more that that ......

As I was wandering around on the ground floor ( where the stationery and a rather fine chocolate shop is ... no I did not succumb!) there was yet another fireplace and the display was so lovely... I leave you with that photo and hope you have enjoyed this little trip through our British history and one of the most beautiful shops in the world..... 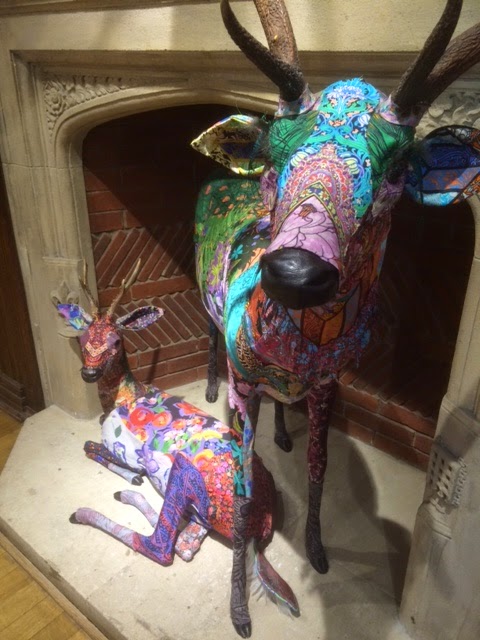 
Posted by Sarah Hawkings at 23:41
Email ThisBlogThis!Share to TwitterShare to FacebookShare to Pinterest