Threads of feeling ... tokens of fabric left with foundling children in London.


Hard is my lot in deep distress
To have no help where most should find
Sure Nature meant her sacred Laws
Should men as strong as Women bind.

The London Foundling Hospital was founded by royal charter in 1739 and its work continues to the present day.  There is a museum in London called the foundling museum and is situated in Brunswick square.  There they have on show some of the things pinned to the babies found.  There were little notes and sometimes rhymes with little scraps of fabrics attached or little tokens for the child to keep from their birth mothers, mothers that had no other heartbreaking choice but leave the care of their child to someone else..... 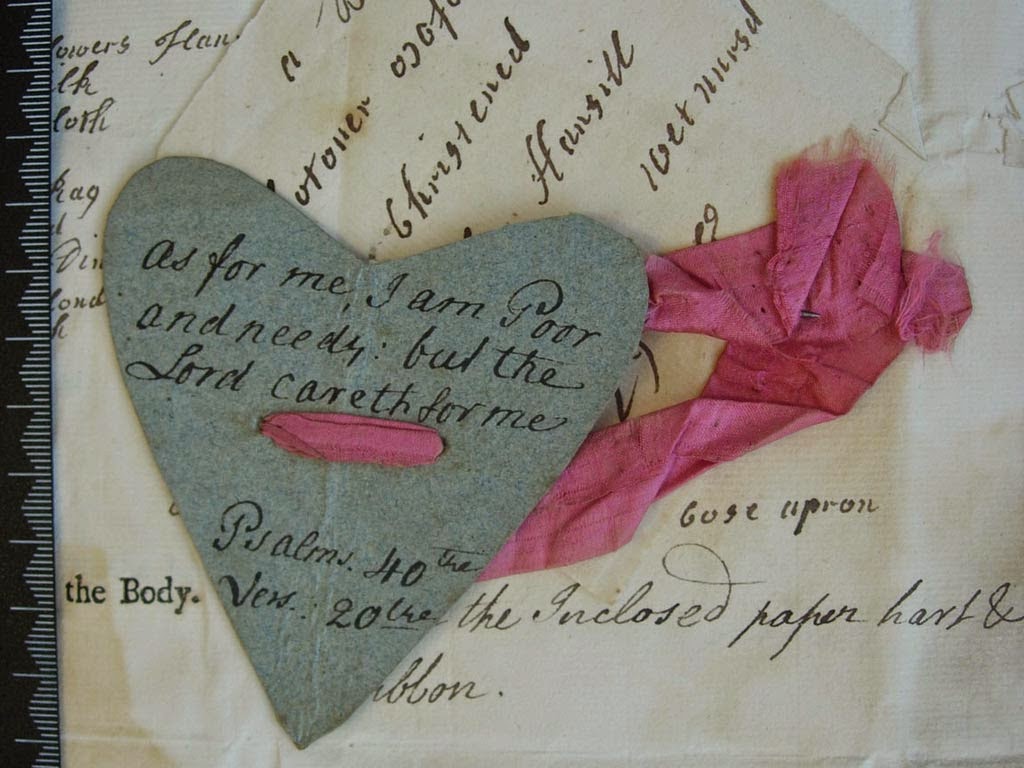 The charity from the beginning tried to keep records and requires a vast 250 mtrs of shelving for the ledgers and entry books, so can not be such a surprise that they also hold 5,000 small textile scraps dating from the middle decades of the 18th Century that are pinned to registration documents. These scraps are both poignant and beautiful, yet sad as it reflects the life of a infant and a mother who had to give up her child.

When mothers left babies at London’s Foundling Hospital in the mid-eighteenth century, the Hospital often retained a small token as a means of identification, usually a piece of fabric. These swatches of fabric now form Britain’s largest collection of everyday textiles from the eighteenth century. They include the whole range of fabrics worn by ordinary women, along with ribbons, embroidery and even some baby clothes. Beautiful and poignant, each scrap of material reflects the life of an infant child and that of its absent parent. 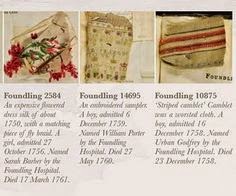 The enthralling stories the fabrics tell about textiles, fashion, women’s skills, infant clothing and maternal emotion are the material of Threads of Feeling.
The importance of the Foundling textiles – 5,000 rare, beautiful, mundane and moving scraps of fabric – lies in the fact that so few pieces of eighteenth-century clothing have otherwise survived that can be identified with any confidence as having belonged to the poor. Ordinary people’s clothes were worn and re-worn by a succession of owners until they fell into rags, or they were cut up and reused for quilts, baby clothes, and the like. If, by chance, they outlived the eighteenth century, they were unlikely to excite the attention of collectors or museums. The Foundling collection includes the whole range of textile fabrics worn by ordinary women – exposing a lost world of camblet and fustian, susy and cherryderry, calimanco and linsey-woolsey – along with ribbons, embroidery and even some baby clothes

Along with scraps of fabric some parents left little tokens such as thimbles, lock and key, even a small ring as well as little token bits of metal with something engraved on. It must have been distressing to leave your child and the fact that they left it with something from their birth family showed, I think, that they cared but had no choice what so ever.

Because of the very well kept records in a time when things were not recorded as they are now we also get an insight into fabrics of the time.  Fabrics that belonged to everyday people and would by now have disappeared and we would have no knowledge of. 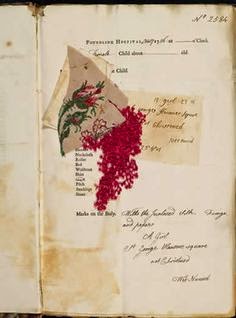 Occasionally some children had some home embroidery or stitching attached to them which you can only assume that their birth mother had stitched.  There were bits of patchwork, Dorset buttons, samplers  Some of the identified stitches included satin stitch, chain stitch, crewel work and black work. 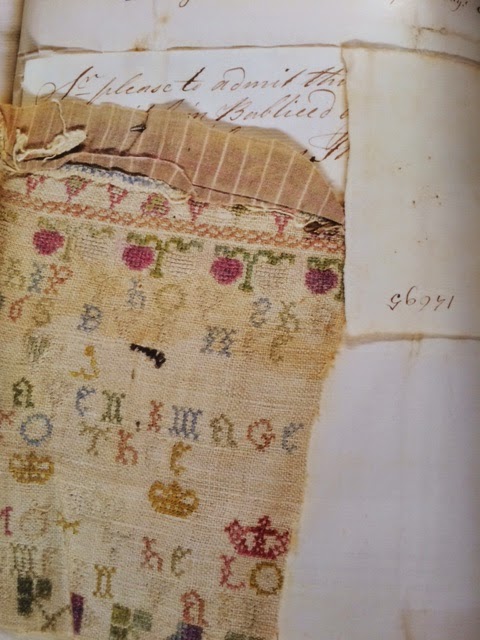 The needlework was often a little crude on the decorative  front among the foundling textiles and this suggests that the needle skills of the working women were not as good as once thought.  They stitched for their family, clothes and bedding and they mended but obviously did not have the time or the money for the materials to produce decorative pieces just for show.  Also they were taught weaving and knitting rather than stitching as it often this was better for work purposes later on.


This is an embroidered sampler attached to foundling 14695, a little boy admitted on 6 December 1759. 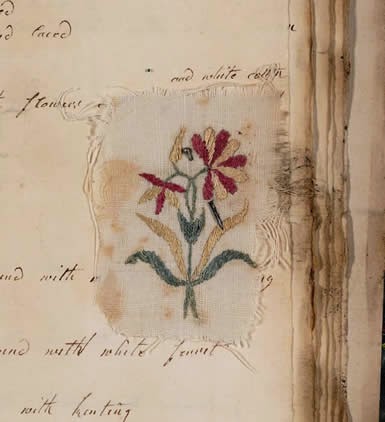 'worckt with flowers' linen or cotton with flowers attached to foundling 14084 a little boy  admitted 3 October 1759.


I have bought a book on this subject called Threads of feeling by John Styles so that I can learn more about this sad but interesting subject.  I have also done my homework on line to read all that I can.  I have used images from google and these are I am sure images taken by the museum and for this outstanding book.  I have enjoyed learning about the foundling tokens and with my love of vintage, fabrics and embroidery I have found it extremely interesting and extremely heart rendering....

I hope that you enjoy reading about this piece of history.  If you would like to visit the museum the address is :
40 Brunswick Square
London
WC1N 1AZ

Opening times Tue - Sat 10.00am until 5pm  Tickets are £7.50 per adult ( there are concessions and children under a certain age go in for free)

I myself will be making a visit to the museum in the next few weeks as this has touched my heart and taken a grip of my interest. 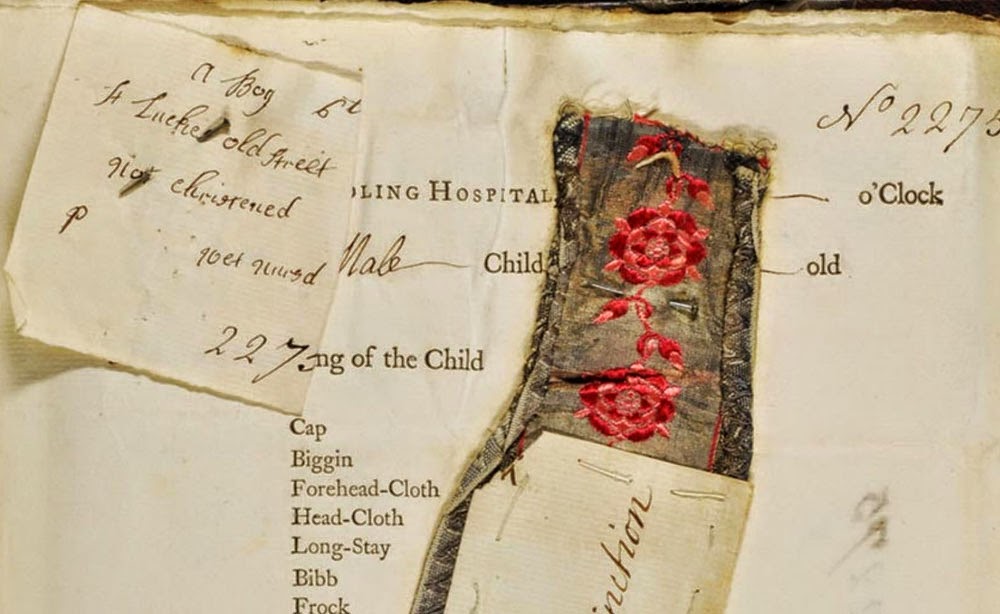 A flowered silver ribbon with a paper sewn to it which reads.
This silver ribbon is desired to be preserved as the Childs mark
for distinction.
Foundling 2275 a boy admitted 6 September 1756. 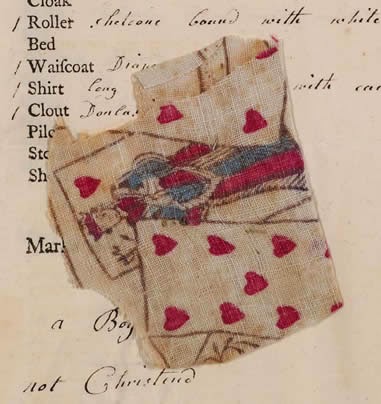 Flowered all over with cards.
cotton or linen printed with a playing card pattern.
Foundling 14922 a boy admitted 24 December 1759. 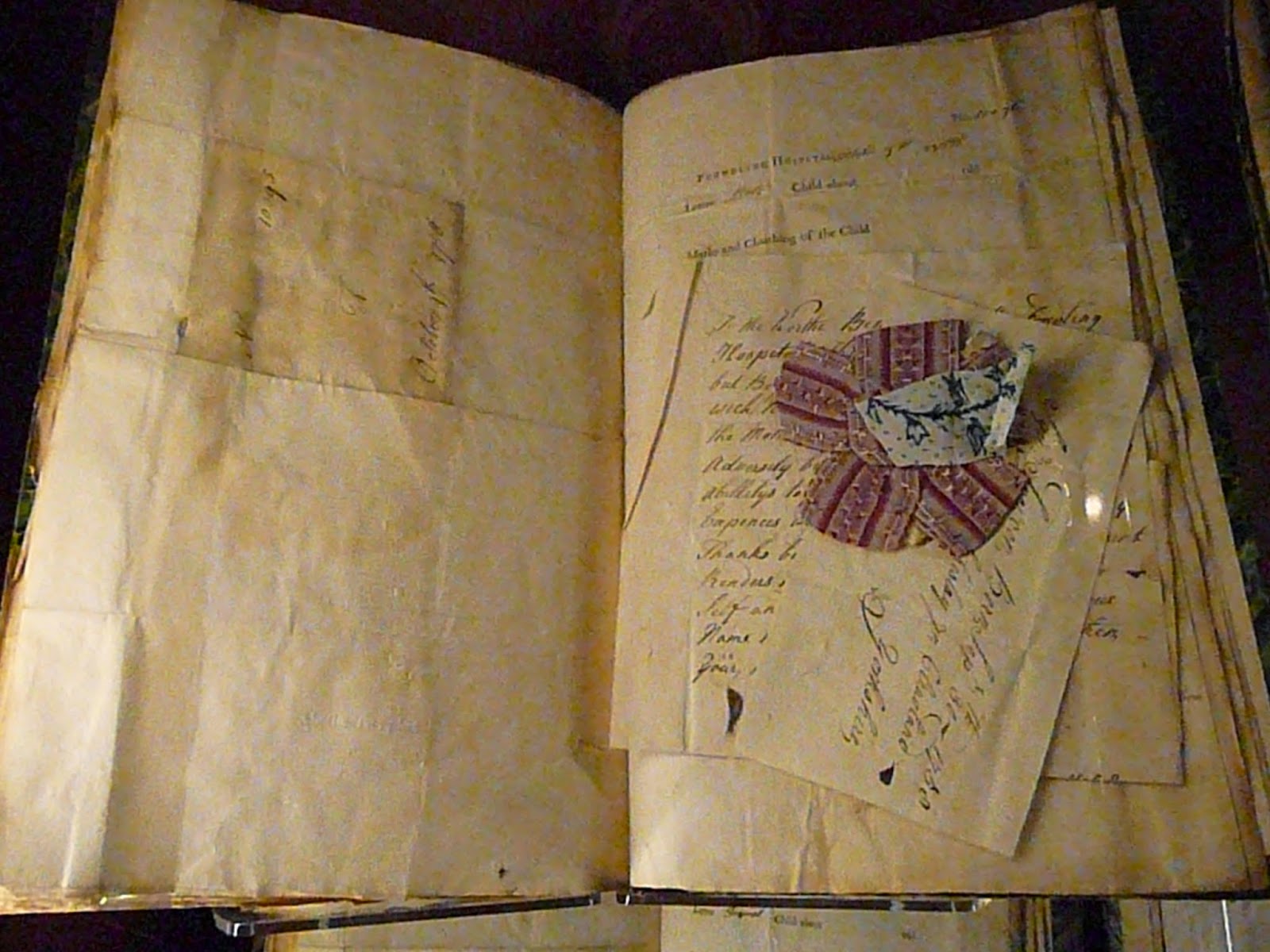 I will leave you with this last picture and a happier note. 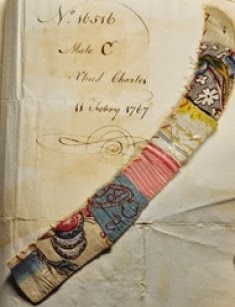 A patchwork needle case made from printed and woven fabrics, embroidered with a heart
and the initials SC and cut in half.  Foundling 16516 a boy admitted 11 February 1767.
Christened Charles, but given the name Benjamin Twirl by the hospital.  Reclaimed by his mother, Sarah Bender on 10 June 1775.

Posted by Sarah Hawkings at 22:52
Email ThisBlogThis!Share to TwitterShare to FacebookShare to Pinterest