Woven air, running water, woven wind these are
just some of the names been given to muslin.
A cotton textile so fine and sheer that it sometimes
appears to be invisible!

This amazing textile originated in India where it was coveted but very expensive and was exported to places such as Ancient Rome, Middle East, medieval China and other parts of South Asia.

In the 17th Century it became a commodity and was under the control of the British East India Company in Bengal.  Buy the late 18th Century, the skilled weavers of Paisley and the textile manufactures of Glasgow and Manchester, astonished at the delicacy of the material made on hand looms in India, strove to imitate it.  Muslin became in such demand over Europe that governments banned imports of it to protect their domestic textile industries.

The picture on the left is a beautiful muslin gown with white work embroidery.


The word "Muslin" is derived from the name of the ancient port town "Maisolos". Muslin clothes were traded by ancient Greeks and Romans from the East Indian port town Masulipatnam, known as Maisolos and Masalia in ancient times and the name 'Muslin' originated from the name Maisolos. The chief merchandise of Maisolia, eagerly sought for by the merchants from the Roman world, was muslin-so favourite a wear with fashionable Roman ladies of that age that a legend has it that an ounce of muslin used to sell in Rome for an ounce of gold. Because of this trade Roman gold coins poured into Maisolia. Several Roman coins were found during excavations of Buddhist towns located near Masulipatnam (Maisolia).
Subsequently, the word Muslin found its place in various European languages as French mousseline, Italian mussolina.

Whether figured or flowered, jamdani is a woven fabric in cotton, and it is undoubtedly one of the varieties of the finest muslin. It has been spoken of as the most artistic textile of the Bangladeshi weaver. They are traditionally woven around Dhaka ,Bangladesh and on the brocade loom. This is a supplementary weft technique of weaving, where the artistic motifs are produced by a non-structural weft, in addition to the standard weft that holds the warp threads together.Jamdani is a fine muslin cloth on which decorative motifs are woven on the loom, typically in grey and white. Often a mixture of cotton and gold thread were/was used. 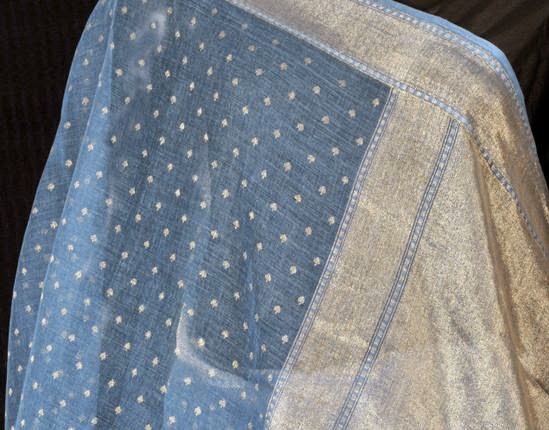 The standard weft creates a fine, sheer fabric while the supplementary weft with thicker threads adds the intricate patterns to it. Each supplementary weft motif is added separately by hand by interlacing the weft threads into the warp with fine bamboo sticks using individual spools of thread. The result is a myriad of vibrant patterns that appear to float on a shimmering surface. What’s remarkable in this weaving technique is that the pattern is not sketched or outlined on the fabric. Instead, it is drawn on a graph paper and placed underneath the warp. 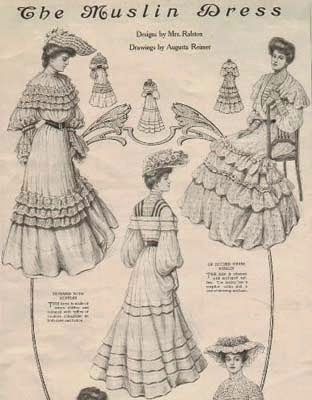 Advert  1904 for summer dresses made from muslin.

When this was fashionable the ladies had corsets and various under garments so muslin was delightful in the summer.

Today not so many clothes are made from it and people associate it with culinary skills such as jam making but more clothes made from this wonderful fabric would be fabulous, especially with white on white embroidery.

In India it is still used for saris beautifully decorated with embroidery, beads and sequins.  Some saris are just pure works of art. 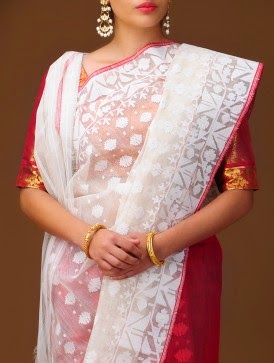 The delicate nature of muslin combined with such beautiful stitchery skills makes collectors want to buy them.

I personally love to find antique muslin and this can be found in Victorian and Edwardian children's garments.  Nightgowns, dresses and of course christening gowns.  At the vintage fairs that I attend sometimes you find little fragments of very old muslin that has been cut from something that could not be preserved and restored as it is too bad a condition.

But one man's rubbish is another's treasure and any little bits like that will come home with me to be lovingly stitched to something and then it will be seen again once more.....

I hope you have enjoyed this very small trip into the history of muslin and will yourself look out for some delicious vintage bits to up cycle yourself.

Posted by Sarah Hawkings at 22:51
Email ThisBlogThis!Share to TwitterShare to FacebookShare to Pinterest