From the manner in which a woman draws her thread at every stitch of her needlework, any other woman can surmise her thoughts.  ~Honore de Balzac


In France samplers are named " marquoir", "marquette" or "abecedaires."These were functional rather than creative past-times. Most of the time it was a work to teach young girls cross- stitch embroidery . From the age of puberty any girl had to prepare her own bridal " trousseau" and to mark each item with her initials .

Cross-stitch embroidery appeared in Europe between the X and the XIII century. Embroidery was an aristocratic pastime. The lady of the manor reproduced motifs from the rugs brought back by their Lord from the crusades. 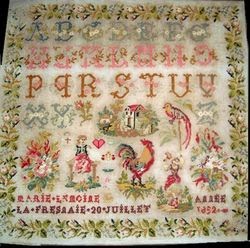 The use of cross-stitch spread in Europe in the XV century and was considered to be something that every young girl should learn.

This sampler was created by Marie Lemoine at La Fresnaie, her family country home, in 1852.
She illustrated it with country scenery and animals. French sampler by Anne Mazelan 1745. This work is closer to the English style than the typical French style. 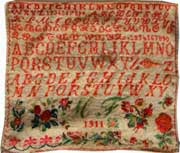 French sampler with a triple and complete alphabet and embroidered flowers, 1911, initials MF. Complete alphabets were rare: some letters such W or I were considered repetitious because they possess the same form as other letters already embroidered. ( Abecedaries were not art work but embroidery exercises). Traditionally some errors were retained to show humility. Perfection was reserved for God!

A sampler made by Virginie Grimoux in France in 1848 while she was attending boarding school. The dominant image of the sampler is the boarding school church 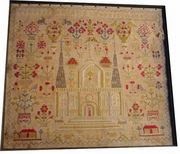 where you can see the little figure of Virginie standing at the top of the step. Surrounding the church she embroidered multiple representation of flowers and a great variety of little animals, icluding birds, rabbits, mices dogs, lambs, cows.


I hope you have enjoyed this little trip into French samplers..... I love looking at antique samplers, it gives me so much inspiration and pleasure. It just makes me want to get stitching.


Happy Stitching!
Posted by Sarah Hawkings at 00:00
Email ThisBlogThis!Share to TwitterShare to FacebookShare to Pinterest