Foundling fabrics and tokens of love 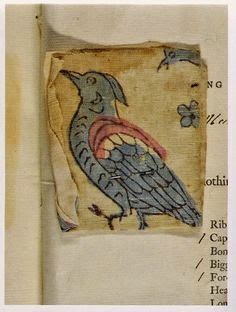 Having been fascinated by this subject I have done a little more research before my visit.  Apart from little tatters of fabrics other tokens were left with the foundlings.  Some very macabre and others pretty little bits of history.  Although only a few children were reclaimed by their parents, the process of leaving a token means that these little ones are not forgotten even now!

I have also learnt that not all children were admitted and there was a process.  It makes you wonder about those who were refused.... This subject has touched my heart. 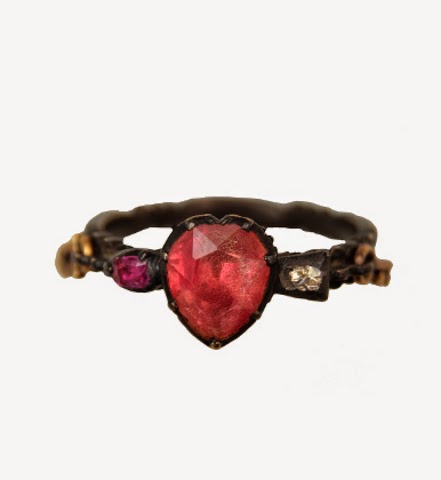 ‘Dear Sir, I am the unfortunate woman that lies under sentens of Death in Newgatt…’  So begins a letter of 1757 addressed to the powers that be at the Foundling Hospital in  London’s Bloomsbury. Written in a strong hand, it contains the poignant petition of a woman on death row, Margaret Larney, that her children, who have been admitted to the hospital separately, might ‘know one and other’. Even if the younger child hadn’t died shortly after admission, Margaret’s eloquent plea would certainly have been in vain. When an infant entered the hospital, its former identity was erased and siblings remained ignorant of their blood ties.

But now, some 250 years later, Margaret is getting a second hearing. Her letter forms part of a small but compelling display of ‘tokens’ at the Foundling Museum, which is on the site of the former hospital. These are the everyday objects left by the desperate and destitute mothers in the mid-18th century who delivered their babies into the care of the Foundling Hospital. Hidden stories unfold through scraps of Georgian life that range from the quotidian— coins, keys, buttons, pieces of fabric, a hairpin — to the intriguing — a diminutive bone fish, a hazelnut — to the downright ghoulish:

‘Child 5588, John, renamed Robin Carr’ was admitted with a caul, a piece of membrane that can cover a newborn’s head and face and which is considered to be highly auspicious. Robin Carr needed all the luck he could get. Of babies taken in by the hospital about two thirds died.
On admission, a child was given a unique number as well as their new name. The document bearing his or her details (known as a billet) was used to wrap the token, which the mother had been advised to bring, in case she should ever be in a position to return to reclaim her offspring. (The mother’s name was not recorded by the hospital.) By identifying the object, she would prove that the child was hers. These miniature parcels, marked with the child’s admission date and number and sealed with wax, represented the hope that one day parent and child might be reunited. As such, they were powerful symbols of love, loss and longing. 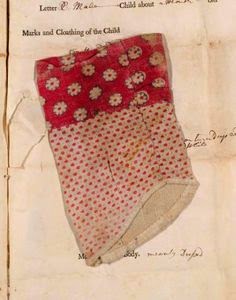 When the hospital opened in 1741, more than half the babies born in London died. Parents of poor or illegitimate children had to choose between leaving them in the care of the parish poorhouses or giving them to the workhouse, where the mortality rate was over 90 per cent.

The little piece of sleeve on the left was made from speckled linen with cuff of cotton. left with a boy, foundling 235 admitted 23 May 1746.

The philanthropist Thomas Coram, horrified by the sight of babies being left to die in the streets of London, established the Foundling Hospital 'for the maintenance and education of exposed and deserted young children’.
The hospital was a charity that relied on donations and, as there was not enough money to accept every child, admission was restricted to babies aged two months or less.
Only 20 children were admitted each month, and this was done by a ballot system. Women who brought in their children had to draw a coloured ball from a bag; a white ball meant that the baby was admitted, a black ball that it was refused.

Because the process was almost always anonymous, few details exist about the mothers. Most would have been from poor backgrounds, and documents in the archives describe the terrible state some of the babies arrived in: a baby boy admitted in 1757 was described as 'Clothed with Rags and Swarming with Varmen’. Another baby admitted in 1759 was 'A Mear Skilinton Covered with Rags with a hole in the Roofe of the Mouth’. About two thirds of the babies given to the hospital died.
Occasionally, the pieces of fabric were accompanied by a note. One boy left in 1749 had a note pinned to his documents that read: 'having a most dear and Tender regard for it… I have trusted it to a Charity establish’d upon so good a Foundation as knowing my circumstances will not permit me to take so great a Care of it.’

While some babies were simply abandoned on the steps, others were taken in with the intention they should be retrieved once their parents’ circumstances improved.
A pink and white flowered ribbon pinned to one registration form of a baby girl brought in on 13 January 1758 had a letter with it. It reads 'Ann Gardiner Daughter of James and Elizth Gardiner was Born in St Brides Parish Octor ye 6th and Baptized and Registered in the Parish Church Octor ye 10th 1757. Begs to have care Taken of her and They will pay all Charges in a little Time with a handsome acknowledgement for the same and have her Home again when they Get over a little Trouble they are in: She is not a bastard Child your Care will be most Gratefully Acknowledged by your most obliged Humble Servant JG.’

The textiles themselves were often testament to the mother’s love. Many chose fabrics showing hearts. One cut from red woollen cloth was pinned to the cap of a girl admitted on 22 November 1758; given the name Isabel Crane by the Foundling Hospital she died a few weeks later on 16 December.

Sometimes the mothers provided fabric with initials, names or dates of birth stitched on to them, and some chose fabrics with pictures of birds, butterflies or acorns, perhaps an indication that the mother hoped the child would have a happy life.

The children who did survive were sent to wet nurses, who fostered them until they were about five, when the hospital took them back and educated them. At about 10 years old, they were apprenticed in and outside of London.

Catherine Walton, who was admitted to the hospital in 1745 when she was three weeks old, was eventually apprenticed in 1757 to a watch-case maker of Fleet Street. 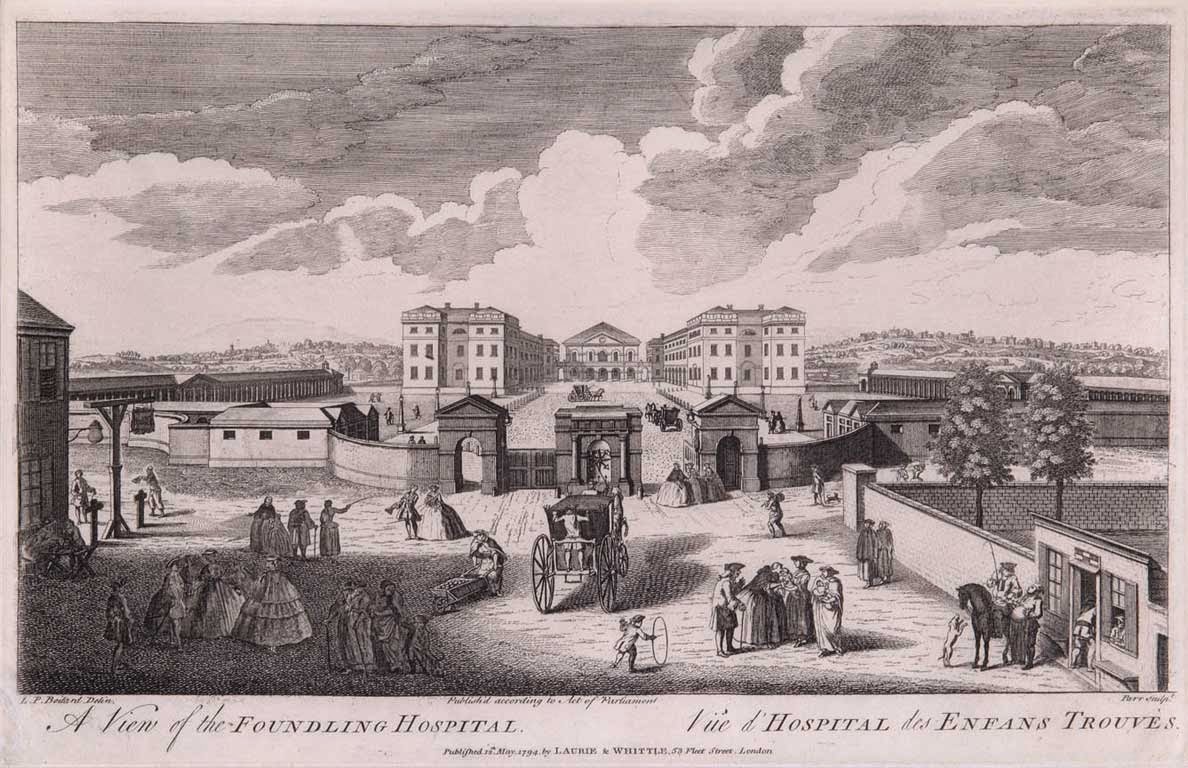 Foundling Hospital in 1750 this building was
demolished in 1926.

Today in our modern society it may seem odd that mothers of foundling babies used cloth and tokens to express their most tender feelings.  The truth is that most were probably illiterate.  The language of ribbons and hearts was accessible by all and was for them, self expression  and not just the second best thing.  Little tokens left to identify your child seems extremely fragile but those parents that came back for their child were indeed able to identify them by this thread of love......

Posted by Sarah Hawkings at 23:42
Email ThisBlogThis!Share to TwitterShare to FacebookShare to Pinterest