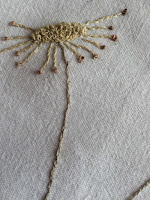 “A poor old Widow in her weeds
Sowed her garden with wild-flower seeds;
Not too shallow, and not too deep,
And down came April -- drip -- drip -- drip.
Up shone May, like gold, and soon
Green as an arbour grew leafy June.
And now all summer she sits and sews
Where willow herb, comfrey, bugloss blows,
Teasle and pansy, meadowsweet,
Campion, toadflax, and rough hawksbit;
Brown bee orchis, and Peals of Bells;
Clover, burnet, and thyme she smells;
Like Oberon's meadows her garden is
Drowsy from dawn to dusk with bees.
Weeps she never, but sometimes sighs,
And peeps at her garden with bright brown eyes;
And all she has is all she needs --
A poor Old Widow in her weeds.”

At this time of the year I love stitching in the garden.  Now we have not had a great Summer thus far but we get the odd moment of warmth and sun, which I make the most of.  The light outside is amazing for embroidery and especially white on white work, so I try not to miss opportunity's when the sun has his hat on!

Towards the end of the Summer season I do concentrate on some Christmas bits, normally for publication as it has to be in early in the season for photography and the design set ups of magazines.

Right now though I am stitching what I call Summer themes and I love it.  The inspiration all around us is incredible.  I am lucky enough to live near the Sea and the New Forest and the Jurassic Coast is not far at all, so inspiration is everywhere.  As I have said before it is sometimes hard for me to settle to a project when something else catches my imagination and I would like to start that as well,  Now if I had three sets of arms all would be well and good ( although I might be stared at in public places ) I could then stitch three things at a time...... 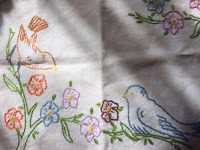 At the moment I am settled to finishing each project, other wise you can jump around on things but actually get no where in the finishing stakes and that is no good at all.

I did yesterday cut out some things for another project, just really to rest my eyes on the close stitching that I am doing at the moment, sometimes a change is as good as a rest, as the old saying goes.  I have been cutting out, writing little sayings and poems so as not to forget them and thinking about how to improve on one project that I am keen to start.

The sun has brought out the bees and beautiful butterfly's PLUS we had a small woodpecker in our garden the other day, I could not believe my eyes.  He was munching on the sunflower kernels and having a great feast! 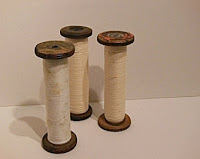 Whilst stitching in the garden I always keep my camera with me and my note book should anything unexpected turn up in my head or my garden.  The trouble was I was so interested in this new addition to the garden I forgot to take a photo.  I have now bought some more of the seeds he/she was munching on with relish, in the hope I will entice it back......

I had another idea about flowers as well but I will tell you about that another day.....  I have to get to my stitching now or the day will have finished before I have achieved much at all today.

Have a great day and of course as always Happy Stitching!

Flowers have their own language ..... 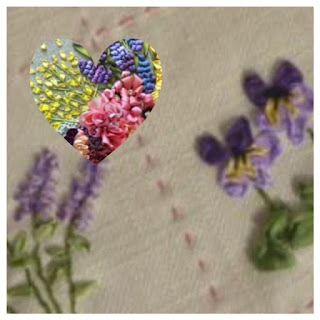