Friendship or Signature quilts and a little of my family history........... Part one.

Our lives are like quilts
bits and pieces, joy and sorrow, stitched with love.

How I would have loved to have had a family heirloom signature quilt! Can you imagine having a quilt that has your great grandmothers name on it and stitched by her and her descendants.  On my mothers side of the family no one has really been a stitcher but not so on my fathers side. My fathers parents were a slight mixed bag as my Nana was of Italian descent and my Grandpa was born and raised in Hampshire and his father and his fathers father and beyond were farmers, they worked the land. 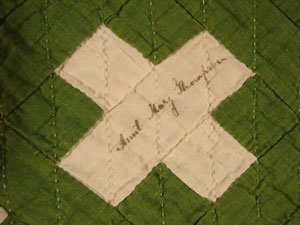 If you go back five generations on my Grandpas side you get George and here is a little bit of my family history.


George Giles was born at Wield, Hampshire, England, 21 February 1830. He was the son of Elija Giles and Charlotte White. He was the third of five children. By trade he was a farmer and a woodsman.

He married Mary Pearman on 13 December 1851 at 21 years of age. To this marriage was born six children. On 7 April 1860, Mary died giving birth to the sixth child. The child also died. This left George with five children under the age of eight years. Three children went to live else-where and George kept Alfred and Emma at home with him. Alfred and Emma were eight and seven years old. They were probably in school and could help with the household chores. Louisa and Francis went to live with George’s mother, Grandma Giles and Mary Ann went to live with Grandma Pearman at Alton, six miles away from Hampshire. The family lived this way for almost four years when Grandma Giles died and Louisa and Francis returned home to their father.

The family lived this way until 16 March 1868 when George met and married Elizabeth Thorn. By this time Alfred, George’s oldest child was 16, Emma 15, Louisa 14, Francis 12 and Mary Ann 10. Elizabeth was 27 years old.
The records show that George was baptized and confirmed a member of the Church of Jesus Christ of Latter-day Saints by William Beamell on 3 March 1866, two years before he set sail with his family for the United States. He may have met Elizabeth as a result of his becoming a member of the LDS Church.

On 24 June 1896, three months after his marriage to Elizabeth he left his home of 38 years and, with his family, set off for America. The boarded an old sailing vessel "Constitution." It was the last sailing vessel to bring any large companies of "Saints" across the Atlantic. There were 475 British, Swiss and German Saints on board. Harvey H. Cluff was in charge of the group. They were on board ship 42 days. They arrived in New York on August 5, 1896.

Louisa Giles Bulkley, was born 10 December 1854 in Upper Wield, Hampshire, England. She was only six years old when her mother died. When she was thirteen years old her father married again and the family left England for the United States. heir ultimate destination was to join the Latter-day Saints in Utah.  Louisa grew up and had children one of which was Emma and she was very very accomplished lady. She could cook and quilt and everyone in her family thought her a wonderful woman.

This dear readers is my only connection to quilting, embroidery and applique..... no one else in my family has enjoyed it at all!  Now I have emails from her descendants and this is how I know of the history of Emma in the detail that I do.  Before she died one of her sons got her to tell him all about her life and he wrote it all down for further generations.

I have a love quilts and I would be thrilled to have a family one in my procession.  I am however enthralled by these quilts.  Quaker's made a lot of these particular quilts especially when someone married and was moving away.  Some communities would all make a square and there would be names and wishes on them and all stitched together.  Other quilt were just made by one person say the mother of the bride and had all her family names and wishes stitched on them.  Quaker's were prodigious record keepers and friendship quilts served both to acknowledge major life events and to record networks of relationships and friendships within the community.

One example of such a quilt was made in 1847 For a Ann Coppock.   She was only 18 when she married.  The names of thirty two men and fifty four women appear on Ann's quilt. 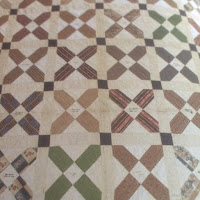 Can you imagine such a wonderful gift to receive on your wedding day.  This served as a wonderful reminder of all friends and family if you moved away or indeed just a wonderful and useful gift from a community of family and friends of this special day.  On Ann's quilt there were names of her husband to be's family as well.

Look at this example of a signature quilt.  The date on this quilt is 1832 and was made by a Rebecca Kohler.   It is in the State Museum of Pennsylvania. 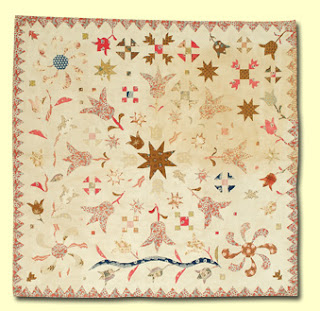 I hope you have enjoyed part one on some history of friendship and signature quilts and some family history.  I have purchased some books on the subject and will be able to read a little about it and share with you.  Also I will do a book review on some so you will be able to buy for yourself if you would like more in depth information.....

I am thinking on my quilt I wish to make of putting some signatures on it and stitching them.... It is never to late to stitch an heirloom!


Have a great day and Happy Stitching!

To quilt is human, to finish divine.
Posted by Sarah Hawkings at 00:00
Email ThisBlogThis!Share to TwitterShare to FacebookShare to Pinterest