Killerton House Visit - A jewel in the Devon countryside... Part One! 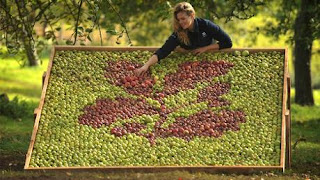 Killerton apples made into the National Trust emblem.
Later in the year they host and apple
and cider weekend in their grounds....
17th and 18th October 2015.


Killerton is a vast agricultural estate, it combines farmland, parkland and woodland, two villages, 18 farms and over 200 cottages.  At the heart lies a fine 18th-century house with a famous Fashion Collection and an equally renowned garden.  It produces cider and apple juice from its orchards and also mills its own flour.  This is a welcoming house which is not vast but beautifully presented and cosy in a way.  This is the home of the Aclands, who have lived in Devon since the 16th century.

I have been a very lucky lady to be chosen to go and visit Killerton on behalf of Pretty Nostalgic magazine and to be welcomed by Shelley Tobin who is the costume curator and Bryony Wilde who both made myself and Kim another lady who was there for Pretty Nostalgic very welcome, and were keen to allow us access to the workrooms at Killerton and show us what happens behind the scenes.

I am going to break this article about Killerton into several parts because there is so much to tell you all and I would like to do this beautiful National Trust house justice and show it all the courtesy's it
deserves.

Upon my arrival I met Shelley in the Entrance Hall and this is an amazing place and arranged in such a way that it is open planned and is also a study with an archway into the music room. It is decorated in beautiful hues of cranberry colours with white ceilings and dark woodwork.  There are family pictures in frames on tables on display and a desk, comfy chairs and lots of memorabilia on display. It is somewhere where I could 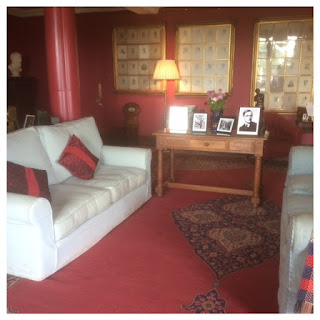 happily curl up in a chair and read or stitch, it has a wonderful feel.  An awful lot of houses open to the public are more like museums, not so with this amazing house it welcoming and cosy but also has a great selection of things to see and do.  In the entrance hall, which was rebuilt after a fire in 1924, Sir Frances Acland commissioned an architect Randall Wells to design a large entrance hall in keeping with various activities of a busy country home. The informality of this setting is very attractive as I said and has a stone floor with beautiful rugs and coat racks.  There is also a large oak table which in the family's time living there, was always covered with newspapers, post, maps and sports equipment.

There are some unusual pictures on the walls in the entrance hall that caught my eye.  They are  engravings from the portraits of the members of Grillion's, the London dinning club where 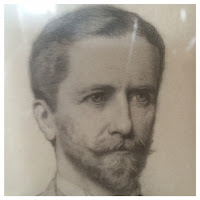 politicians of widely differing opinions would meet on alternate Wednesdays to 'dine together' at Grillion's Hotel in Albemarle Street.  These are outstanding and so interesting.  I can not explain to you how these images jump from behind the frames, it is like they alive behind the glass!  if you would like to know more about this and see all the members photos then go to www.npg.org.uk > collections or google for Grillions club London, or indeed if you would like to see the original engravings then go to Killerton and you can see them in person.

Shelley and myself met Bryony and Kim for a coffee and some shortbread ( which was homebaked and delicious ) in their cafe and sat chatting about the day that lay before us. Having left home at 7.30 am and now it is 11.00am it was very welcome.  Kim had walked there as she is lucky enough to live on the Estate.  We discussed the concept of my writing a blog or two in this case and how it was going to be shared and what Shelley thought we would like to go and look at being that I am all about needle work and embroidery...

We made our way to the entrance hall and the rooms above, which used to be bedrooms and now plays host to their workrooms and the exhibitions.  In the workroom and behind the scenes is where Shelley has some costumes and clothes stored for different reasons.  It may well be some are repair work or cleaning or indeed new intakes of clothes that have been donated for her yearly exhibits.  On the table were some 1920  to 1940's swimsuits made from knitted stocking and wools.  There was a 1920's male white and black striped all in one bathing suit and was supposed to be helpful to the modesty of the bather...... I am afraid when such things became wet from the sea, modesty probably went out of the equation!

Then I spotted this stunning child's dress in green with the most beautiful daisy design embroidery! Oh my... I was told it was not the original ( which they do have in storage ) but a replica made years ago 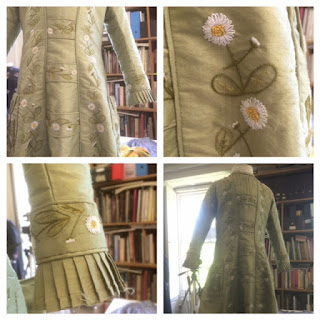 of an 1880 girls afternoon dress.  It was made by a lady called Doreen Dean and she actually made about 20 other replicas also.  This is to protect the delicate nature of some of the costumes and then they can lend these out to people for other exhibitions...  The detail in the making of this dress with the beautiful cuffs and the embroidery is outstanding, I could not take my eyes off of it... Have a look! 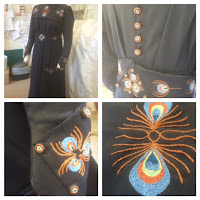 There was also a replica of a 1908 ladies embroidered dress made in the arts and crafts style again made by Doreen Dean.  It is, as you can see made in a dark navy blue with colourful embroidery and amazing detail... take a look at the buttons! both of these replicas were on dress making mannikin's that the team specially alter for each costume that is displayed.
They have stocking knit over them and are soft and plump as not to damage anything.  There was one that had been specially made  with a hoop skirt made for such costumes that need it.... There is a very talented needlework team in place here as well as extremely knowledgeable costume curator who knows her stuff inside out!

Carefully stacked in boxes lined with acid free tissue paper with photos on the side of what is concealed within are stacked on a shelf, Shelley opened two for us to see.  The first one was a woven silk dress around the 1700's and was 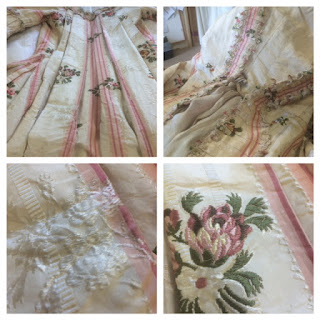 The second box was taken down and put on the table and lifting its lid carefully and opening the tissue paper to reveal a  1810 Georgian white muslin gown ( right out of the pages, it seemed, of pride and prejudice!)  my heart nearly stopped!!!... both of these for mentioned gowns were original and I was up close to them!  There was the most stunning embroidered white work.  I could not believe it, this 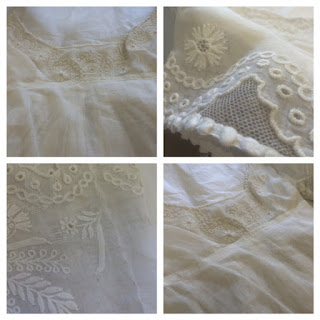 was so beautiful.  On each sleeve was a little lace detail.  Of all the outfits I have to say this was my favourite thus far.... It looked comfortable yet feminine and on a hot day would have been beautifully cool, even with the undergarments that would have been worn.  For me in the history of fashion this has to be one of my favourites ( the other being the flapper dresses, again simple style design and beautifully decorated).  I honestly had to be torn away from it because I do not think I would tire of staring.  There was still so much to see and do and with Shelley's knowledge so much to hear. 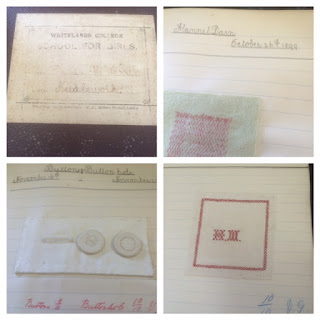 it can not get much better Shelley produced a book that was from 1899 - 1900 from the Whitelands College, well known in Devon, which had belonged to a student there called Hilda Warren.  Hilda was being taught the finer things of stitchery along with basic invisible mending.  I say basic but believe me Hilda was talented and the tutor thought so too.  Contained in the pages of this little book were samples of her work, worked and re-done over again to get it just right.  Hilda's writing at the top of each page with the date and her work sample in the middle of the page, along with the tutors markings and some with comments....

The work room and the view is a wonderful place full of treasures to those of us who are passionate about history and stitchery ..... These wonderful pieces preserved for all the future generations to see.  The collection is moved around so that all pieces are or will be on display at some point and they have an exhibition on at the moment called The F Word.....

I will let you know all about that tomorrow.  There is so much to show you all that I have had to break my blog into several stages.

I really must away to my workroom, although it does not quiet have the view of Killerton, it is still a view of the garden with the pear and apples trees and the bees and birds busily flying around about their daily business and today I think I might take some hand stitching into the garden as it seems be a not too bad a day out there!  It is great light to stitch by if the sun is not directly in your eyes.

Have a wonderful day and Happy Stitching! 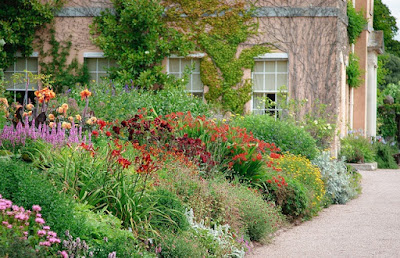 Posted by Sarah Hawkings at 00:41
Email ThisBlogThis!Share to TwitterShare to FacebookShare to Pinterest