“Fall has always been my favorite season. The time when everything bursts with its last beauty, as if nature had been saving up all year for the grand finale.”
Lauren DeStefano 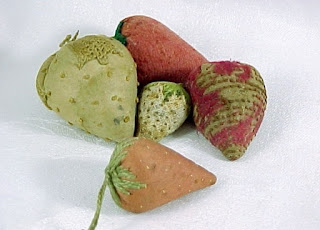 This is where we are off to today .... Have a little look at this history which has it happens is partly British.  The buildings have been restored and there is much to see ....

Strawbery Banke is an outdoor history museum located in the South End historic district  of
Portsmouth in New Hampshire. It is the oldest neighborhood in New Hampshire to be settled by 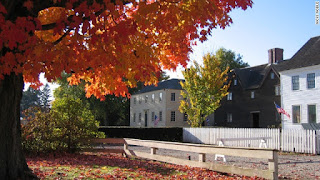 Europeans, and the earliest neighborhood remaining in the present-day city of Portsmouth. It features more than 40 restored buildings built between the 17th and 19th centuries in the Colonial, Georgian , and Federal  style architectures . The buildings once clustered around a waterway known as Puddle Dock, which was filled in around 1900. Today the former waterway appears as a large open space.

The neighbourhood's history traces back to 1630, when Captain Walter Neale chose the area to build a settlement, naming it after the wild berries growing along the Piscataqua River.  Strawbery 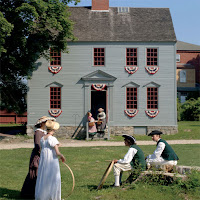 Banke existed as a neighbourhood for four centuries from 1630 to the late 1950s. The neighborhood's buildings were saved from 1950s urban renewal by the efforts of a large group of historic
preservationists. Strawbery Banke opened as a museum in 1965.

There is a beautiful shop here called Mr Pickwicks as well which we be exploring.  Also we will be discovering the beautiful New Hampshire town of Portsmouth which we are told is all done up in its Fall finery with every lamp post decorated ..... also there are a few antique shops here from our map so we will be investigating some fabrics and quilts, buttons and threads later .... Oooh!

And I believe there is some stitchery around (samplers) ..... I will have to investigate that one! well you have got to, don't you think?

Have a wonderful day and as always Happy Stitching!