Tis a gift to live simply 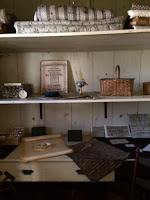 We had such a wonderful time at the Shaker Village and as promised I thought you would like to see some photos of there vast stitching rooms.  The Shaker woman would take turns in doing things.  Some weeks it would be stitching and some weeks in the kitchens baking or tending to the fruit crops and vegetable gardens.

Everyone had their duties.  They shared work and chores and the men took the hard heavy labour. There were four elders in charge of the community two being men and the other two woman. Everything was talked over and discussed and therefore fair and even. 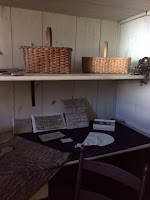 The Shaker woman really were extremely talented in stitchery and art, some wrote beautiful poems and sayings and all were encouraged to be artists. 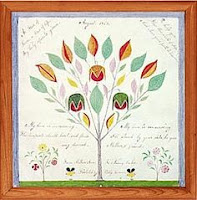 They made what ever they could and bought what the could not make.  They would make beautiful capes with hoods and these were sold outside of the community as well so that they might earn money to buy things they needed.  They would collect seeds from their vast gardens of fruit and vegetables and these were sold as well ( they were very popular as the seeds were very good indeed) everything they did was done properly.  There saying 'hands to work and hearts to god' was one of their mantra's. 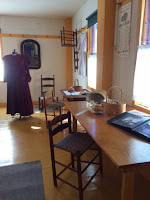 They were clever beyond there time as well making wooden sock shapes made especially for each individual to dry them on and to make the right size.  They made all their clothes for woman, men and children.  ( they used to take in children that were orphaned or from family's who fell on hard times... they were were free to stay and work along side them for bedding and board and being part of the community. or indeed free to leave as well when they were old enough)  If you left and returned even two years later, you were welcomed with open arms.... 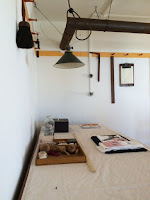 wonder at their tools and things they had made to make their stitchery easier, all way before there time it is wonderful.  There are still boxes of threads that were not used and embroidery threads, pin cushions and bits of fabrics... I was in true vintage fabric heaven.  Have you spotted on the first picture stunning fabrics folded on the top shelf and there is some beauties I can tell you.

There are still bits of unfinished sewing and all their tools there as well.  Until the 1990's there was still a shaker lady still alive and living in the village in private rooms.... She was the last shaker here and wanted it all to be preserved for people to see and learn from. 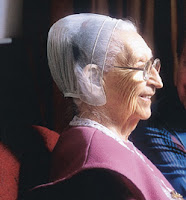 Her name was Eldress Bertha Lyndsy      and it was her vision for future generations to be able to look into bygone times that we have to thank for the preservation that has enabled us to go see and learn.

If any of you reading this get the chance to visit this magical place then jump at the chance believe me......

I hope you have enjoyed your little tour .... Have a great day and Happy Stitching! 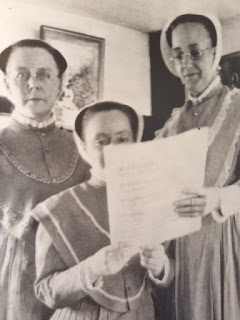