“There’s nothing, absolutely nothing, half so much worth doing
as messing about in boats.”

Kenneth Grahame, The Wind In The Willows. 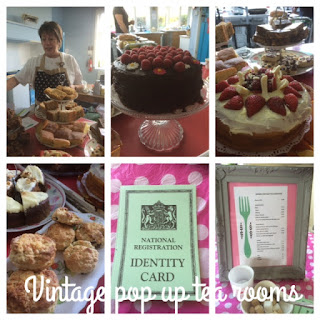 Well I wouldn't say messing about exactly on a boat BUT we did go on a Ferry to the Isle of Wight on Sunday to a great vintage fair.  I did not announce it before because it was uncertain whether we were going and if the weather became nasty the boats don't sail as often and I don't like being on a boat for an hour in choppy seas.  The crossing was great, there was a little sea mist but it was calm and the journey was really lovely.  Sat looking out at sea and sipping a coffee it was really relaxing.

We went from Southampton to East Cowes and that is where this fair was being held.  It was in Whippingham in the village hall.  It was free to get in and I was asked to come by a lovely Lady called Sandy and again by the organiser Jayne.

We arrived about 15 minutes after the doors 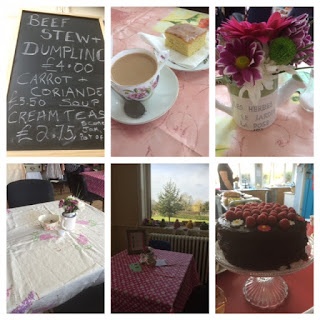 opened and the Hall, which has not only a large part, but two further smaller rooms ( when I say smaller they are by no means tiny)  There was great period music playing in the background and I went straight to the pop up vintage tearoom to meet Jayne as she had told me that is where she would be.

It was lovely to meet her after chatting via mail and also I was eager to meet Sandy because dear readers she is the one who got me to get up early on a Sunday and go over on a ferry to the Isle and attend a fair that I had not heard of, and I would say most of the mainland has not heard of as well.  All this about to change .......

The village hall was packed with vintage goodies and people who hand make items such as jewellery, cushions, paper products and more. 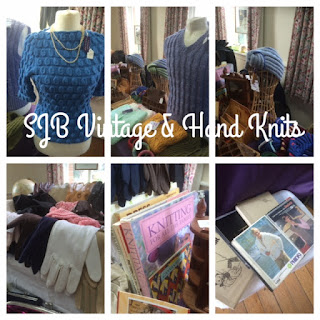 along with a home made soup.  The cakes were some of the best that I had ever seen and although I did not succumb to cake, I have it on good authority that they were delicious .. My husband had three helpings!!

There were stall holders that sold as a small business and others who were there for charity including the Isle of Wight food bank.

There were clothes, china, records, lace, shoes, fur coats, vintage suitcases, typewriters, glass and all manner of vintage to tempt people with. 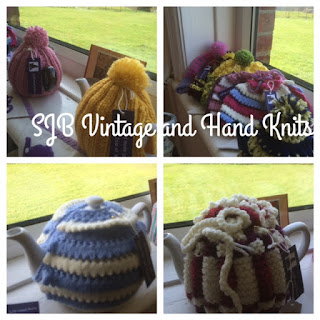 The tables had been set out for people to sit and chat and have a coffee or food were beautifully dressed with different cloths on and fresh flowers on the tables along with menu's and a great touch, of identity cards... Every little detail had been thought of and by now the smell of the beef stew was making tummies rumble....

I went around taking photo's and finally met the lovely Sandy who has a knitting business.  She knits exquisite things from 1940/50's patterns and with vintage wools when she can get them. Sandy has a waiting list as well and I am really not surprised.

She also knits tea cosy's and they were displayed in one of the smaller rooms on the window sills by some more tables to sit and eat/drink at.  The views from the village hall as well were pure beauty you could see the sea as well. 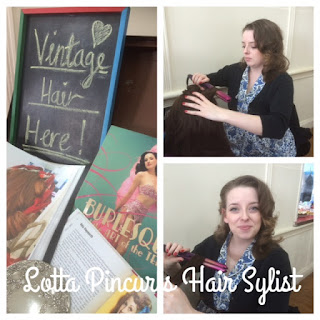 Also set up at this fair was Lotta Pincurls Hair Stylist and she was there doing some great work on ladies hair. Curling and pinning to make some wonderful 1940.s hair styles.  She had come over from the mainland to attend the vintage fair from Southampton.  You can find her on twitter or facebook if you are going to a special a event or indeed just want to look fabulous on a night out.

This lady was lovely and talented and watching her work you could see she has a great passion for what she does. 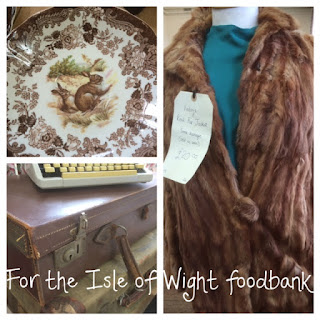 Some stall holders were there simply because they loved doing it and it was like a great hobby rather than a business.

One stall was for the food bank as I said and there was some beautiful vintage goodies on the stall at such reasonable prices.  I did buy some china and my husband then spotted a jug on here too so we came away with some great goodies.

That rabbit plate that you see did actually leave the Isle and come back to the mainland with me along with a few more bits like it.  To my ever groaning china collection, but really it was so pretty I could not leave it there ... could I ? and we helped a little towards a really worth while cause. 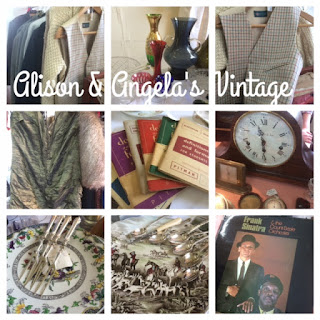 Then I met Alison and Angela who had a huge array to tempt people which included vinyl records which happens to be a passion of my husband, who was straight in there looking through eagerly.  There were beautiful clothes, china and books along with clocks and glass ware .....  Men who love vintage clothes would have had a field day here, there were some fabulous pieces including a really great waistcoat. 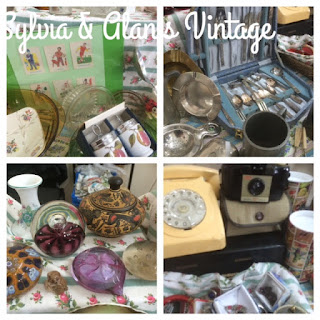 Sylvia and Alan's vintage stall was another eclectic array of goodies and also they run several events on the island as well over the next few months ... I will give you all details nearer each event for your diaries but if you are interested you can contact Sylvia via email on lapwinggo@yahoo.co.uk  It is worth the trip over on the boat not only to see how pretty the Isle of Wight is but also if you have a vintage event to go to as well it is such a fabulous day out.  There of course are some great places to stay if you want to make a weekend of it from Bed and Breakfasts to great Hotels for every pocket. On board the ferry there are lots of free maps and pamphlets to help you decide and the boat trip is both fun and relaxing with great facilities on board, including things to keep the little ones busy. 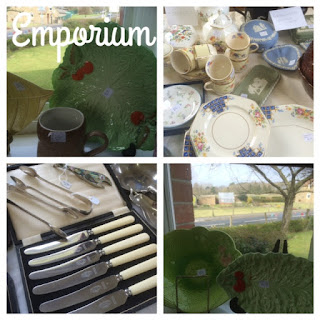 Snuggled in the corner with great views was Emporium and there was some beautiful china on display.

I had spied a rather fine sandwich plate with side plates to match and so again this did jump in a bag and come back with me.  I want to do a couple of vintage tea parties this Summer so I am on the look out for some fine china and this fitted the bill beautifully.

It is pictured on the top right.  Blue with delicate pretty floral's...... 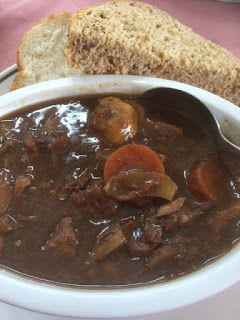 So the hunger pains had started and we decided to have a beef stew each.  I have to say it was superb. It was beautifully rich and beefy with tender meat and small dumplings all served with two large pieces of bread .. One piece white and one brown.

We did some swapping because I am a brown bread lover and my husband's pick of choice is white.  I have to tell you that this was only £4 each and we could not believe we had lunch for under £10.  Jayne actually told me that some people come in just to have their lunch and two elderly ladies come on a bus to her events so that they have a hot meal that is home cooked and I have to say beautifully presented and very scrummy! The prices are unbelievably reasonable and the doors of this vintage fair are held open to everyone. 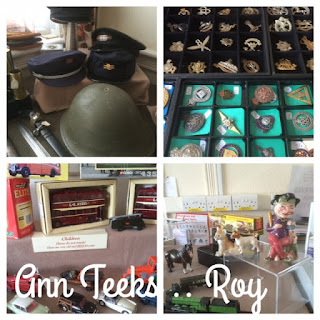 In the foyer there was a gentleman called Roy selling all sorts of vintage bits from toy cars to world war II hats and badges this was something for the Gents that attended and my husband was looking for some time through all the unusual things that were displayed and he said it really was a treasure trove of great choice and quality. 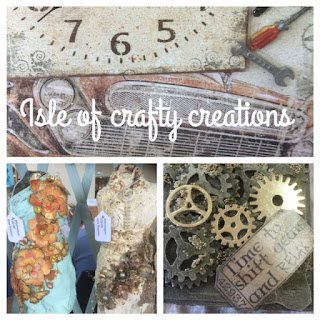 There was a stall in the hand made section called Isle of Crafty Creations and this lady had made some very pretty things from stamping and papers.

They were very well made and very unusual as well. 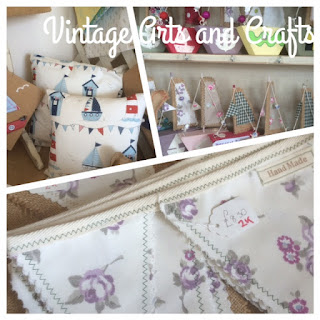 There was so much to look at and see and everyone was so friendly and welcoming but our time was coming to an end but by now, there people were flowing in and out and the pop up vintage tearoom was doing a roaring trade.

I was able to take one more photo and this was a lady who made cushions, bunting and dear little wooden boats all painted with fabric sails .... This stall was called Vintage Arts and Crafts and was in one of the rooms off of the main hall.  The sun was now shining after a misty start to the day and was coming through the windows and showing some amazing views.  It was time
to say goodbye and have a few hours explore

before our afternoon sailing back to the  mainland.

Jayne organises other fairs and I will be putting them on the blog as and when the dates are secured. Jayne does have a waiting list for stall holder as well but is always on the look out for further exhibitors of both vintage items, haberdashery and artisan hand crafter's.  These fairs do not run in June, July and August for the simple reason that they are competing with other larger events that go on at that time on the Island, but they then start up again and run all the way until Christmas and then start again in February.  They are a monthly event so keep an eye out for the next one.

I would like to thank all the people that we met on Sunday and for making us most welcome and their kindness ... If you live on the Isle of Wight and are reading this then keep an eye out for further dates and put them in your diary and if you are not reading this from there then why not make a day or weekend of it and visit Jayne and all the great people.  If you are interested in a stall or would like more information call Jayne on 07543794054. 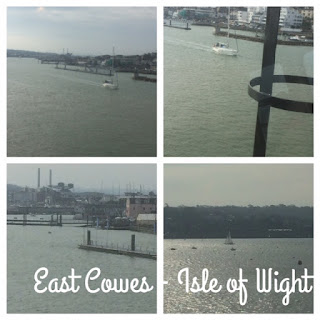