Canterbury Shaker Village -- The home of creativity and peace.

Hands to work
Hearts to God. 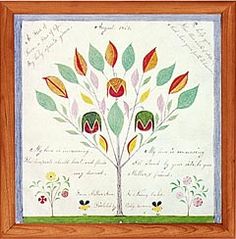 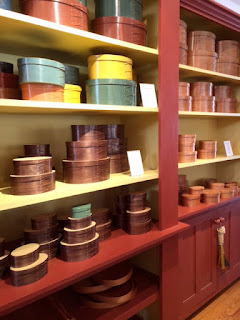 Well the time has come for me to leave you this week and there will be a post tomorrow .  I wanted to show you today The Canterbury Shaker Village and also what they have to say about the Shakers and the village that has been left to the trustees and volunteers to restore and look after.

I am trying to think of how to describe this wonderful place to you.  I can only tell you how I feel.  There is a calm and beautiful atmosphere here that I have never experienced before.  When you walk around there with the Autumn leaves in the most gorgeous of colours and hues with a slight warm breeze and the quiet that surrounds the acres of land that it is on, there is a peace and tranquillity that wraps itself around you.  The sewing rooms with their inventions of 100 years or more ago and the Sisters amazing talents and tiny stitches.  Gorgeous threads on show and pincushions and fabrics all displayed for us to look at. Here is what the village has to say about the Shakers.

Canterbury Shaker Village was established in 1792 when followers of founder Mother Ann Lee formed their seventh community in Canterbury, NH, which remained prominent for 200 years. The Village has operated exclusively as a museum since 1992 when the last Shaker sister in residence, Ethel Hudson, died. The few remaining Shakers live at the Shaker Village in Sabbath day Lake, Maine. At its height in the 1850s, 300 people lived and worked in over 100 buildings on 3,000 acres at Canterbury Shaker Village.
The religious group that we know today as the Shakers was formed in 18th-century England when dissidents from various religions, including English Quakers and Methodists, formed a religious society based on prophetic doctrine. The group, formally called the United Society of Believers, were known as Shaking Quakers, or Shakers, because of their use of ecstatic dance in worship.

The Shakers emigrated to the United States in 1774 and eventually established nineteen self-contained communities from Maine to Kentucky. Canterbury Shaker Village is one of the oldest, most typical and most completely preserved of the Shaker Villages. The Village contains the only intact, first-generation Meetinghouse, built in 1792, and Dwelling House, built in 1793, in their original locations. Overall, the Shakers were the most successful communitarian society in American history.

The Shakers’ revolutionary Christianity shocked their contemporaries. They challenged almost every mainstream ideal of American society during their time. Shakers believed in communal ownership, pacifism, dancing in worship, equality of the sexes, celibacy, and living simply. Most Protestants of the day found that bringing dancing, whirling, and clapping into a sacred space and elevating it above the word of God, spoken by an ordained minister, was sacrilegious. But to the Shakers, the dancing signified a communal, not individual, relationship with God, which was a powerful symbol of the Shaker cultural system.
Despite the monastic characteristics of their communities,  the Shakers were not primarily a contemplative religious society. According to founder Mother Ann Lee, the Shakers devoted their “hands to work and hearts to God.” They believed in community ownership, but were aggressive 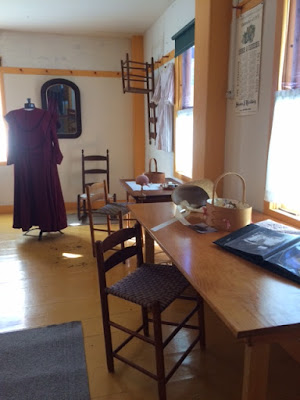 entrepreneurs, launching industry after industry, developing and adopting new technologies, and reinvesting the earnings into community enterprises to encourage greater growth and productivity. At their height,  they were highly successful in competing with the outside world. By the 1830s the Shakers at Canterbury were rich in buildings, land, cash, wood lots, livestock, produce, industry, community possessions, and community skills. The Shaker “brand” quickly became known for quality, integrity and reliability. Shakers cared for the poor and used resources and profit for social good.

Today, the museum at Canterbury interprets 200 years of Shaker life through its exhibits, buildings, gardens, programs, and tours. The museum has an enviable collection of Shaker objects, manuscripts, and photographs along with surviving architecture from all periods of its history. Canterbury Shaker Village is a unique resource for learning about Shaker architectural intent and early Shaker community planning and design, as well as the many periods of Shaker life. The postcard-perfect setting hosts tens of thousands of visitors each year, making it one of New Hampshire’s most popular cultural attractions. 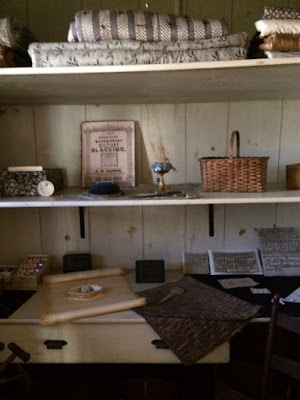 When you visit there is so much to see. Not only all the buildings that have been beautifully restored and filled with the original artifacts but also the beautiful land to walk around including the Shakers cemetery.  They did not believe in personal gratification in life so they did not want it in death.  Instead they are all buried there but with only one stone that tells you who they are.  It says simply SHAKERS.

They have a lovely cafe for visitors and it not only sells drinks and fruit and snacks but does really
lovely handmade breads and soups for lunch at this time of year.

There is some original art that some of the sisters did and you can buy copies of some in the shop if you like it.  There were talented seamstress's and of course the famous Shaker box makers as well.  There are people who still make them there today using the tools and the same old ways.  You can watch them make them and these are  sold in the shop.  The maker is written on the bottom of each box.
I like to wander around and pick up different coloured leaves and press them in my journal and they have all stayed thus far the same colours which is amazing.  Some of my leaves are 10 years old now so I will be collecting more. 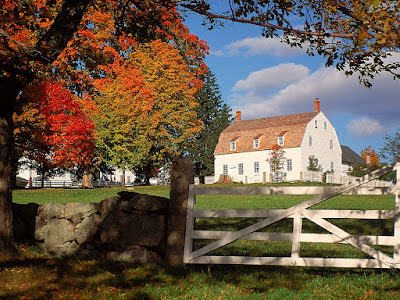 This is where we will be on our Wedding Anniversary wandering around here all day and bumbling.  There are two more buildings open that were under renovation last time that we have never seen and they found some belongings to one of the sisters there they had not seen before so lots new to look at as well.  Its the walks and the atmosphere that bring us back every time we go to New Hampshire, oh and the sewing rooms for me and the soups for my hungry husband!
I hope you have enjoyed a little look around where I will be in a few days and think of me immersed in all this plus I will have already been to see Becky at Quilted Threads to pick up my hand dyed shaker threads ....  Ooooh I really can not wait, when I get them back to the Inn where we are staying they will all be laid out on the bed to photograph and look at.  I can be a good hour doing that ... only a stitcher will understand, oh and my husband <3

Do not forget to tune in here tomorrow and all that remains for me to say is   Happy Stitching! XX 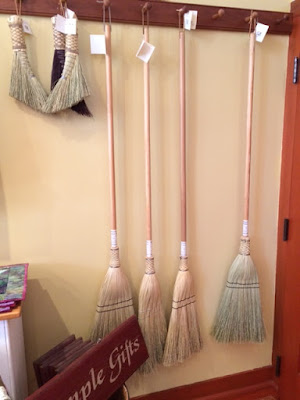