Beautiful things come together
one stitch at a time. 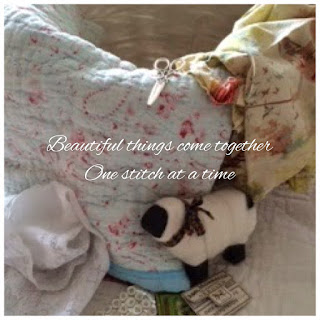 I was looking through my quilt stash the other day, well one of them anyway it is a very old and naturally chipped cupboard in the original colour paint and I love it.   There are heart lavender bags hanging and in the folds of the precious quilts and eiderdowns to stop the muncher's having their four course meal on them.

I love going in there and moving all the goodies about, well of course I am just checking for muncher's, that of course is what I tell myself when I find over an hour has gone from my day.

The cupboard that I am talking about is the one we bought at a vintage fair last year and we had a bit of trouble with where it was going.  Basically it was going where our little utility is but it was just an inch too big so some furniture had to be swapped about if you remember.  Our lovely friend and neighbour across the road helped heave it upstairs with my husband.  I actually do not think I could have lifted it and certainly not now its full of such gorgeous textiles.

I took some photos for you to see it and its contents ...

In the Summer there are wild roses and lilies, and rabbits and pheasants.  And turtles sunning themselves beside the quiet ponds.

The roads across the moors are rutted and sandy, and ramble to the sea.  There are miles and miles of split rail fences and some are white as bones that have been in the sun for a long time, and some are silvery like pewter.  And behind the fences where scarlet lilies grow is a patchwork of colour, creeping along the ground and flowering in high bushes - reddening in the fall and flaming under the sun.

A long time ago there was a homesick man named John O'Connell, who lived near Hummock Pond, who sent to Ireland for some proper flower,for he was weary of seeing the commons without any yellow on them at all and was lonely for gorse and for broom. 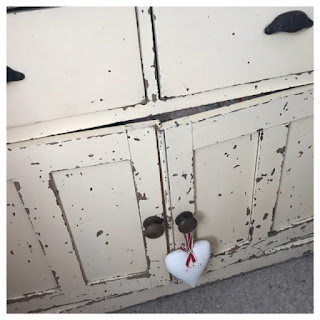 When the seeds arrived, O'Connell sowed them with a broad hand.  The gorse hardly left the doorstep but the broom went gallivanting all over the island.  And when you see its golden blossoms shining on the moors, you should think of Mr O'Connell, who dis so much for the scenery.

There will be many flowers in my Patchwork and stories of the fisher-folk of Sconset who built the small grey houses on the cliffs where honeysuckle and roses send their fragrance seaward.

In Nantucket town the merchants built on cobbled streets, within scent of the sea but away from it.  And the grand ladies of Main Street had to climb their walks to sea the Ocean.  There will be grand ladies in my Patchwork.  And their Quaker town, with its shades streets and wharves and its warehouse down by the sea.  And the bay where the Rainbow Fleet scuds where once the whalers sailed.
Oh my patchwork is going to be a rhapsody of patches from the rag bag of Nantucket! Bits of dreams and deeds of daring - lovely stuffs from far seafaring.  For Nantucketers were a wandering lot, and the lives they led and things they did were as full of colour as cretonne and confetti.

I am making my Patchwork in Nantucket. Quakers lived once in the house where I am living and walked the streets that I walk.  Working in the streets I walk and working in the gardens watched the same moors and skies as I, and the same sea. 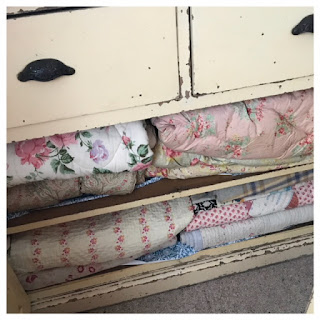 There are the same names on the streets and the alleys are the same.  For this is a town that keeps its ancient ways about it, and place names are like a poem.  There's Tattle Court and Darling Street Lane with dressmakers signs in the windows.  And Stone Alley, Step Lane and New Dollar Lane.  There was Break Neck Alley but now they call it Sunset Pass.  Vestal Street ( where Maria Mitchell lived) and Jail Lane and Gay Street was Coffins Court; But Nabby Bailey's Lane is still Nabby's - and Traders Court is Traders' still.

On the back streets the sailors lived, and the little store keepers.  But the ship owners and merchants built mansions to take poor folks breath away.  They changed the name of the street where they built from State Street to Main Street and sent to Gloucestershire for cobbles to make it grand.  And Henry Coffin planted wine glass elms on either side.
The merchants built close to the sidewalks, with their front door on the street and there gardens in the back.

Mrs Thomas Macy had the loveliest garden in town with lilac and syringa bushes and flowering currant and three terraces, and a hothouse!

In 1833 Henry Coffin returned on one of his fathers ships from a voyage around the world.

His ship had tasted water in strange seas
and bartered good at still uncharted isles
She'd oft coquetted with a tropic breeze
And sheered off hurricanes with jaunty smiles.

And Henry had eaten the lotus of the Nile and drunk the poppies of Cathay.  He stopped to gather seeds and pulled roots in strange, faraway places; and he collected slips and bulbs for the gardens on Main Street.

Henry brought the first English ivy to Nantucket and that which now grows everywhere came from a root in a young Captain Coffin's sea chest, that his sister planted in a corner of her garden and he slipped by and by for the old brick wall at the north end of his own garden.

Henry also brought home a night-blooming cereus, and when it flowered he put it on his father's doorstep with a hurricane lantern beside it, so that everyone could see and smell it blooming there.

Cobbled streets and bright flowers are part of Nantucket's patchwork ... tang of the sea and honeysuckle ...  salt winds and grey mist ... blue water ad the glint of sunshine on a scarlet sail .... starlight and sea gulls, and water lillie in a quiet pond ... and the foam of jade green breakers, and fish hawks flying. 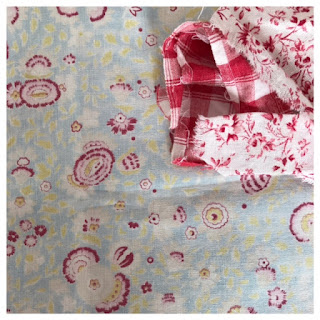 I think it is a most charming book and it is all about Nantucket, the people, the place names, flowers, quilts and Quakers .... I am enchanted by it and I really hope you have enjoyed a snippet of it. Basically you have read Chapter One with me.

It makes me want to stitch and design something based on this delightful take of an Island of Patchwork.

I can close my eyes and imagine the heady scent of all the flowers it mentions and it makes me now long for Summer.

Well I hope you have enjoyed it so for today that is it and I am going to go and see my Mum and have her belated Birthday party with her family.

I hope you have a wonderful day and as always HAPPY STITCHING! XX

Posted by Sarah Hawkings at 23:07
Email ThisBlogThis!Share to TwitterShare to FacebookShare to Pinterest