An Island of Patchwork. 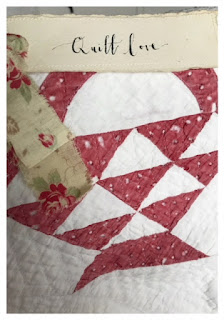 When I was in America last year I picked up this beautiful old book that was published in Boston in 1941.  It is called An Island Patchwork.  It is set on the island of Nantucket. It is a stunning book and in black and white.  I would like to let you read Chapter one it will have to be in two parts as it is a few pages long but a beautiful read and I thought you may love it as I do.

In the days when Nantucket was full of Quakers and the seas were full of whales, patchworks were common as clam shells, but dear in the eyes of the ladies.  Then hope chests began with pieces and patches and baby girls sewed seams, and every woman quilted.

Before a girl married she had to have a bakers dozen of patchwork comforters, a pillow case full of stockings she had knitted, and a counterpane for the bridal bed.  The comforters, padded with wool, came in handy when love grew cold and fretful.  And patchwork counterpanes bloomed like flower 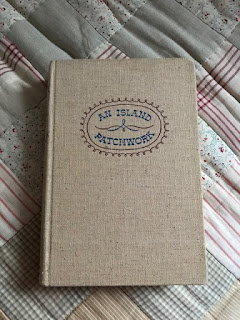 gardens on the spare beds of the quaint old Quaker town.

Patchworks 'for common' were made with odds and ends, as hash is made - or turkey soup from left overs.  Quaker grey was a popular colour, cider jug brown was practical .. made with bits that wore like iron, and would not 'show the dirt' And made so durable that unborn generations inherited them, and most of New England families still have one in the attic.  For a quilt of homespun was a quilt forever.  And patchworks that warmed the Quakers were by and by, to keep many a Model T from freezing.

But the joyous ones were made of scraps of calico. Violet and purple and myrtle green.  Buttercup yellow and wild rose pink and bright as the commons in June.  India cottons blue as azure bachelor-buttons, chintzes of checker-berry red and nainsook white and dainty as daisies , sprigged calicoes from Calicut, and chinces glazed like gingerbread.

Beside the cotton patchworks there were others of silk and velvet called 'slumber throws' but these were made by the Worlds people - and frowned upon by Quakers, who did not favour folderol in bed.  'slumber throws' were feather stitched with embroidery floss and considered pretty recherché   by a sisterhood who kept them on the parlour couch to warm their knees of a chilly day when the minister came to call.

This was in the Horsehair sofa age, when flowers on the centre table were wax or shell and kept under glass.  It was the era of Victoria and the Epoch of the quilt.

But it is of earlier patchworks that I would sing - of crazy quilts and counterpanes as bright and neat as Quaker gardens ... some people say that Quakers had no use for flowers, but in Limerick, long ago a group of Quakers cultivated the loveliest gardens in Ireland, bright with Bouncing Bet and flowering primrose.

Purely decorative things were banned in a Quaker colony, but if it could be shown that they were useful, they were permitted.  So some smart Sister sold the Brothers on a garden, God wot! No rose plot nor ferned grot - but a nice little back yard garden, with sweet alyssum in with the yarrow and 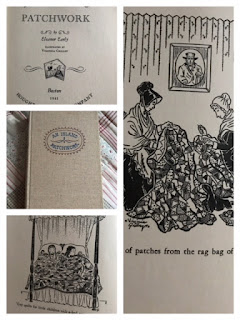 motherwort and marigolds to cheer a body up.

Patchwork is the most picturesque of American fold arts and of all the antiques we have in New England it best expresses our character, because it shows that we never wasted anything, not even a snip of calico.

pioneer women expressed their love of colour and longing for decoration in crazy quilts with stuttering syncopes, and colours to make a rainbow jealous.  Quilting Bees were gossip fests.  Piecing and patching released the Sisters peeves and helped them put with the wilderness and the Quaker husbands.  There is a rhyme that goes like this ...

When fretted by this single life
That seems to be my lot
I list the many men whose wife
I'm glad that I am not!!

Which is the way a good many women feel about the Fore fathers, who were indubitably Pious and Noble - but wouldn't it be terrible to be married to them.

My Grandmother and her league made five quilts a piece for her four daughters.  Her daughters and their children soon spent the money Grandfather made, but we hung on to the quilts grandma made.  And the one I like the best is a crazy quilt, splashed with colour in a design called 'hit or miss' .

Hit or miss was any easy pattern, and the girls gave it everything they had - from broadcloth to brocade, from Grandmas antique moiré to Grandpas gay cravats.  Homespuns and cashmeres - seaweed green and starfish pink, poplin petticoats and patches - with here and there a bit of blue for some old happiness they knew.  Faded scraps and spangled snatches! Gay quilts for bitter nights and happy things for little children sick-a-bed to snuggle under.

And now I am going to make a Patchwork - a crazy quilt of Nantucket with gay shreds and bright pieces,with people and things and bannocks and kings.  Stories that will not wilt.  I'll stitch into my quilt and scandals old and dear. Odds and ends and odd folks too.

Lucretia Mott. the Quaker suffragist.  Keziah Coffin, the lady smuggler: and Maria Mitchell, who went star gazing on the roof of the Pacific Bank - and discovered a comet on a clear Nantucket night!
There will be pioneers in my Patchwork and merchants and masters.  And the men, half Quaker and half sailors who went whaling round the Horn.  And the women that married them and had their babies.

There will be old houses and the sea.  The fine sturdy mansions of Main Street.  The roses that bloom and the honeysuckle that smells in the dawn.  And the dunes where the bayberries grow, and beach plums shine in the sun on the roads that trail like ribbons of moonlight over the purple moor.

On the moors are ponds serene and still - and very blue.  In the Fall red berries glow like fireflies, and bayberries grow like weeds.  And there is a man who makes sweet smelling candles, to sell in the town.

A bayberry candle burned to the socket
Brings luck to the home, and gold to the pocket.

Well that is the first instalment of chapter one, I really hope you are enjoying it as I am.  I will bring 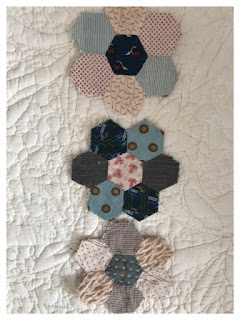 you the next part on Thursday and it is a little less than above but just too much really in one hit on here.  I have spelt it like it is in the book not to take away its quaintness.  I have put Nantucket on my places to visit next time we are in New England.  It is a real must indeed.  There is a huge quilt history there and Quakers too.  I think it will be a little like walking back in time.

The first chapter is about quilting and I will continue with that for you.  Then it goes on about Nantucket its self and I can not wait to cosy down by the fire and continue on reading it.  Today our friend from Devon arrives around lunch time so I am getting the fire ready and my basket of stitching for today.  We can catch up over stitches....

For today that is it and I will be back here on Thursday until then have a wonderful day and as always Happy Stitching! XX