Giant snow globe .. it was magical.

The world had turned into a giant snow globe
and it was magical. 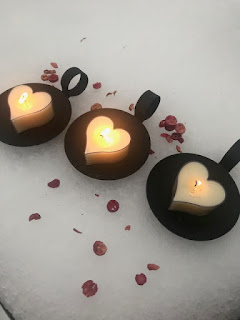 Well the snow came and it fell from the sky and so much fun was to be had.  On Wednesday afternoon it started and did not finishing falling until well into Thursday evening.  We had so much gorgeous fluffy stuff.  I was uncontrollable.  So on Thursday morning I was out there, taking some photos and walking around.  We kept going out and feeding the birds but it was windy and around minus 8, so we had to get the snow off of the birdbath and chip away at ice for them to drink, and you know they were very thirsty indeed.

I was taking photos and generally rolling around in the stuff!

There was a down side to all this though we had to cancel Mums Birthday party as her brother and sister and family just could not get out for it.  It has been postponed until this week instead. 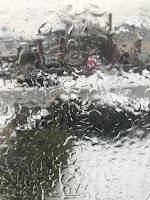 So my sister and I decided that we would go on Friday to visit her and give her some gifts that we had wrapped up.  The florist had delivered her flowers and balloons and the care home had them in their office until Friday when they would give them to her when she woke up and was having her breakfast. So all was set.

Unfortunately my sister and I could not get there.  Iced rain fell on Thursday night.  It did not melt
the mounds of snow but left a one inch thick sheet of ice on top of it all.  The roads were horrendous and our windows were all iced on the outside to a point where there was no view at all, it was like have modesty glass around the whole house!

Our car had the same all over it and it looked like something out of Narnia! if Tumnus had wandered down the road he would have fitted right in with the old street lamp outside shining away in the snow and ice and dark with snow, that had started falling again on top of ice. 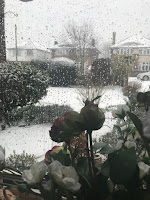 I phoned my sister and she said we can not get to her and boy did we feel bad.  I phoned the care home and the laughter and noise that was going on!  They had decided ( the night staff and chefs) to do another Christmas because of the snow.  The trees and decorations had been put up.  They were laying the tables with crackers and cooking a Christmas dinner with all the trimmings!
When Mum got her flowers and balloons she thought it was for Christmas.  All our names were on the card so we just let her think it.  She had the best day apparently and she did not know it was her Birthday.  So Birthday is happening this week with the cake and wrapped gifts now that the snow is all but gone.  There are little drifts in our garden that is clinging to but it has gone really and the temperatures have risen to a dizzy 7 degrees so it is warmer.  We now have rain. On the plus side I can see out of the windows again and my plants in the garden are starting to recover.

Mum keeps saying how lovely the flowers are.  I am so pleased with our florist who obviously saw the writing on the wall and thought I think I will get them there before it gets worse!  They were there on Thursday by 10am....

I was house bound on Friday so it really was a snow day.  My husband worked from home both 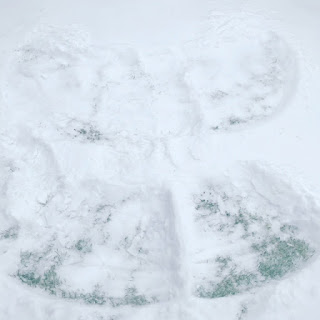 Thursday and Friday and boy were we pleased he did.  A train left Waterloo in London at 5.45pm  on Thursday evening and got stuck just outside Christchurch here which is about 3 miles from us and the passengers were not rescued until 9am on Friday morning.  The train froze to the track with the freezing rain.  There was not food, water or hot drinks, not electricity or power it was sub zero temperatures and the toilets blocked!  ... it was 15 hours of sheer hell so the passengers who were interviewed on the news said.

Anyway we were cosy and the open fires were going.  We have a open fire in one room and a log burner in another down stairs and it was toasty and warm.  We had lots of food in, too much as it turned out because our guests for the weekend did not make it to us in the end either.  We shared some bits around the neighbourhood were delighted with packets of crumpets and brioche! Yes I managed a snow angel on Thursday.

No sewing was done at all but I did do some journaling.  I could not sit still long enough to stitch.  I also caught up on emails and took photos ....  Oh and had crumpets and tea by the fire!!! 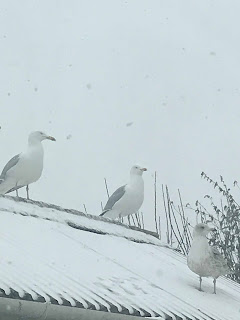 I could not see much out of the windows at all but they cleared at the weekend as the temperatures
rose from minus to plus.  Our little conservatory on the back went so dark with the mound of snow on its roof and was bitterly cold out there so sitting there bird watching was interesting...

As you know we live near the sea and I noticed in the area that the seagulls had come in further to land.  They were waiting on rooftops and sheds for people to put some food out.  So of course I cooked up some bacon and bits and put it out for all to share.  They gobbled theirs very quickly but they can not fit in the bird house with the roof.  The magpies and crows can but the seagulls can not .. that is how big they are.

You can see from the photo I snapped of three seagulls .. there were more lined up but I could not get them in the photo.

It was a lovely few days indeed.  This week however I have to get back to the real world and chase people about my kits.  In point of fact I wrote strongly worded emails yesterday to them so awaiting some replies this morning.

Also I have to get ready as I have our lovely friend from Devon coming tomorrow until Thursday morning and then he is back again next Monday for a few days as well.  He is off to see other friends and we are a half way pit stop which is fabulous.  I will get lots of stitching done by the fire as he has his red work to do.  If you remember the last time he was here a few weeks ago I showed him split stitch and French knots.

One thing his bedroom is done as our guests did not come at the weekend so the guest room is perfect.

I have my basket of sewing and I intend to spend at least 6 hours today stitching.  I am hoping by this week I will be making up some kits and those of you who have pre ordered do not fear yours is safe before I put them out there to sell.

Well that is it for today and I hope you all have a wonderful day.  I will be back here tomorrow a little earlier than today.  I decided to show you my snow pictures instead of my normal chatter so I had to collate some. 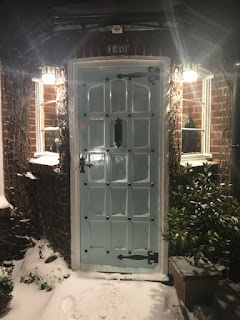 It looked like Christmas at our home.
Posted by Sarah Hawkings at 00:00
Email ThisBlogThis!Share to TwitterShare to FacebookShare to Pinterest