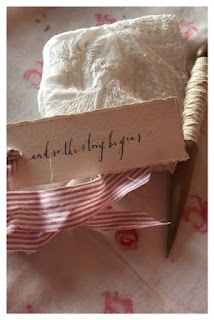 It was all go yesterday I felt I was whirling like Autumn leaves there was so much to do and achieve and I am pleased to say I basically did.  I have stitched the first little slow stitch kit design and that makes me happy.  It worked well and therefore I was in the position that those of you who have said you would like one of my kits will be when it drops through your letterbox.  Although I did not receive it in a box with all the beautiful wrapping that is planned ..... But I imagined that I did.

Yesterday started out as a nice sunny morning and then it was quickly take some photos before it decides that having rose that morning it did not much care for it and went back to bed and let the other elements take over!!  However the sun gave up around mid afternoon here and the most fierce hail stone storm raged outside and that was it for the light.

Still I got that piece of stitching done and I am pleased now today I can type up the instructions with knowledge of what I feel is needed to stitch the first in a series of four smaller designs.  These will be followed by a slightly larger design but is one on its own.  Well that is enough about  the kits today except to say I really hope you like them.  It is like that when I send one to a magazine in America, my heart is in my mouth until I hear that is good.  I am told not to worry as they love what I do - still its my version of stage fright I think. 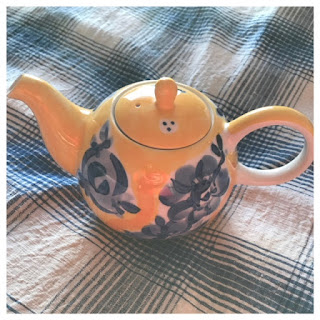 Today I would like to tell you a little story about a teapot! ... Before Christmas I had a knock on the door and there stood our lovely postman with a parcel in his hand.  I had to sign for it and it had travelled all the way from America.  It was such a surprise.  Anyway I opened it up and the card inside was from our great friends there but actually it was from his sister who we had only just met but got on famously with.  It was like I had known her all my life and Thom had said when I met his sister Lisa it would be like that.  She loves vintage and she is a talented stitcher and maker.

As you know I was really not well and it was literally a few days before the big event.  I opened it up and it was a lovely teapot.  I found a spot on our dresser with pride of place and then I mailed her and said thank you and that she really was naughty to send it.  Lisa said no she saw it and it was so me that I had to have it.

That evening I showed my husband and he said it was a great size for me as I only drink herbal tea and not black tea and it would be fabulous to make a pot instead of a cup and have it in my sewing room  and not have to keep going down stairs to make another.

Not remarkable I hear you all say, a nice story but still! - well said teapot sat there and it was not used over all the time I was poorly and it was only the other day that I decided to make tea in it.  So on went the kettle and I was choosing what tea I would like ... I took off the lid to warm the pot as I have been taught by the tea drinker in this house and I could not believe my eyes.  Inside was a little bag of stitchery bits, cottons, needle threader, tape measure, thimble and in my other hand I was holding the lid, which was actually a pin cushion!!! ......  I was amazed and laughing, so much so I had to call my 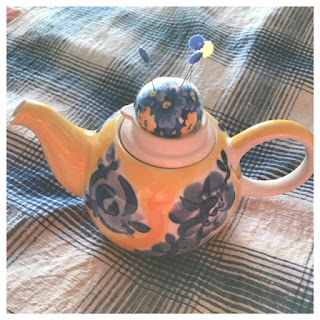 husband who could not believe it either.

I had to mail Lisa again and confess that I had only just noticed that it was not just a teapot for me to make my drinks but the dearest teapot ever!  She laughed and said she thought I had not opened up the pot at that moment and had waited to see what my reaction was when I did!  This gorgeous and thoughtful gift takes pride of place on my desk in my stitching room and when ever I look at it now I can not help but give the biggest smile every time!

I feel it was like a gift that gave twice, I was thrilled to have a pot to have three cups of Cinnamon tea in at my desk under a cosy but I am thrilled with the sewing version that has brought Spring and Summer into my room in the Winter months that are out of the window as I type this.  It is sunny again but today I will not be fooled.  It is cold out there and when I go out later to have a warm drink with my Mum  ( I make her a flask of hot chocolate from here and take in her mug from here and she loves it) I will dress like a snowman again ....

Well that is it for today and I hope that you all have a most wonderful weekend and the sun shines for us all.

I will see you back here on Monday, Happy Stitching! XX

ps ... I am going to make myself another coffee now before I do anything else!
Posted by Sarah Hawkings at 00:00
Email ThisBlogThis!Share to TwitterShare to FacebookShare to Pinterest