The Women's Institute .... During WW2


During the second world war the WI felt it important to keep going to meetings and gathering together not only for moral but indeed to help war efforts. 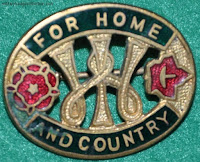 The Ministry of Food allocated sugar to the NFWI to be distributed to WI Preservation Centres in order to make jam and can produce which would otherwise go to waste. All the produce then went into the nation's food supply -

During the war, the WIs contributed an enormous amount to the Home Front. From the outbreak of war in 1939 they co-operated with caring for evacuees, but, as in the First World War, the main contribution was in growing and preserving food. Between 1940 and 1945 over 5,300 tons of fruit was preserved; that is nearly 12 million pounds of fruit which might otherwise have been wasted, provided food for the nation. This was the war work for which WI members became renowned (and the 'jam' image has stuck ever since).
One positive event in the 1940s was the formation of the WI’s Denman College which opened in 1948.

They raised money  for things badly needed during the war as well including ambulances and helped with the Dig for victory gardens and community air raid shelters too.

In the country side the WI members wove potato baskets as well and really did help with the war effort for raising money with baking and sewing.

I do not know if any of you watched the first series of Homes Fires, set in war time and centred around a village community and the WI but I was transfixed and can not wait for the second series to start next year..... ( too long to wait after only 6 episodes I think personally)

Anyway I hope you have enjoyed our small trip this week through memory lane and it would not be complete with out a little bit of the music of the time so why not make a drink and enjoy some swing!

Have a great day and I am off to my stitching ...... Happy Stitching!