During the WW2 there were lots of campaigns to help people support the war effort and of course to become resourceful with the items that they already had or were in the attic. 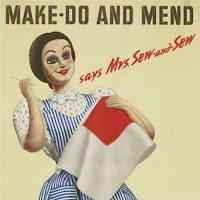 One such campaign was Mrs sew and sew ... This was a cartoon lady and she was also in publications for you to learn how to darn, knit, make new from old and so much more.
I have dug up some of these for you to see and at the end here there is a short original filmed campaign that was probably shown at the cinemas to encourage resourcefulness in the home.

Women in particular were asked to look at thing differently and where they saw Grandad's old wool suite, they could cut it up and make a new jacket and skirt in the design of the day. 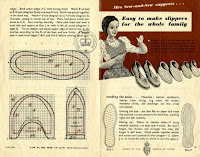 To be careful with woollies and make sure and check for moths and how to darn them and keep them fresh.  If the had a really old wool jumper to unpick it and knit socks or scarves for the Winter months or to send out to troops who badly needed these things.

Darning properly and how to make slippers.  Patchwork made a come back and all handy crafts in general.  Patching up things and how to invisibly mend. 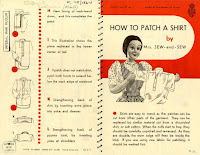 There became a comradely in villages and towns and people pulled together and helped one another. Stitching, knitting and crochet were in every home.  In addition to that you could save coupons on clothing and this helped enormously. 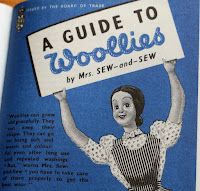 Do not get me wrong it must have been terrible to live through this period with not knowing if loved ones would come home and the bombs dropping and homes gone in a split second but they way that people
lived by not throwing away things that could be useful and making things for presents and helping one another, this was a friendlier time and less waste.  Children learnt the old skills of stitching as well as the three R's and although I do not want to idealise war in anyway, this time was a less disposable society and people did not waste anything at all, if it could be helped.

I think that Mrs sew and sew is delightful, I really do and I loved watching the short advertising film and hope that you will as well.  I have decided to go to a little local crochet cafe near my home to learn ...... Yes people I can not crochet and this cafe has drop in courses for absolute beginers to the extremely talented and gifted.  It is held on a Thursday and there are several times.  You pay when you turn up, which is great and get a coffee too.  I can knit ( to a point) but I would like to try and make grannie squares and do my own throw, so wish me luck.  It is an hour or so out of my week and will not only be very enjoyable but I will be learning a new skill as well...


Posted by Sarah Hawkings at 00:00
Email ThisBlogThis!Share to TwitterShare to FacebookShare to Pinterest