We live in a throwaway society. When our clothes get threadbare, stained or the seams of our trousers show wear, most of us simply dispose of them by throwing them in the bin or donating them to charity before going on the next shopping trip down the high-street.

Clothing has become cheaper and cheaper over the last decade as high street retailers have pushed margins and suppliers so hard that we now see T-shirts that cost less than a loaf of bread.
This reduction in price has led to a devaluation of how we see and feel about our clothes. We don´t see the value in repairing a T-shirt when we can get a brand new one for £3 when we next go down to the local supermarket to do our weekly food shopping. This throwaway society seems a far cry from how people saw and related to their clothes in Britain during the second world war (1939-1945).

However having said that the movement is coming back.  There are lots of us vintage lovers out there who would like to buy vintage clothes and things for our homes.  We are learning all the old crafts again and buying second china is very popular as well, even though this makes the prices shoot up a bit.  That said I would still like to buy a piece of china for using at home, like a beautiful teacup and saucer and pay £4/5 for it than buy a mass produced one that mostly is not even British.  I have patriotic feelings for my country and I see no shame it.  America is very patriotic and I think that is wonderful that they are positively encouraged to be so! 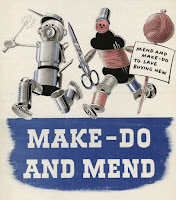 The make do and mend movement played an important part in the daily life during world war two.  The war caused a shortage of supplies which was down to the sinking of ships trying to bring supplies across the channel to England. Another reason for a shortage of clothes was that „clothing manufacturers were commissioned to manufacture uniforms as a priority instead of civilian fashion... and the introduction of clothes rationing in 1941. Everybody was given ration books which had coupons inside them which had to be used in order to buy clothes or food.

Everybody had the same number of tokens so people could not buy more than their fair share.... Everyone was given 66 coupons a year – which was later reduced due to intensified shortages. A women’s blouse was 12 coupons for example and head wear such as hats were coupon free.
Because of this shortage of clothes and through publications/campaigns like Make Do and Mend by the Ministry of Information in 1943, which intended to help women to get the last possible ounce of wear out of all their and their families clothes.

People started making new clothes from old ones and from all other household linen. „During the world wars women became masterminds of make do and mend, so resourceful they fashioned up sexy knickers out of parachutes".


I found this great original trailer from the wartime and it is encouraging women to Make do and mend!.....   Have a little look and enjoy!  I am away to my stitching now so have a great day and as always Happy Stitching!