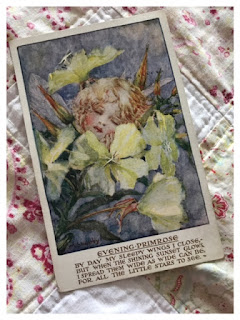 Do you remember me showing you that little book I bought called wise words with the art work by Millicent and Githa Sowerby?  I was saying to you all how I would like to have some of the pictures framed but did not think I could bare to destroy this gorgeous book?  Well joy of joy I found that
these two extremely talented sisters did other things..... they did postcards too.

So I have been a little busy collecting some of these from Ebay for the last week.  I am very pleased with what has turned up so far.  I have three more on the way and then I am done so that I can frame them to hang up in my sewing room.

Look at the evening Primrose art work how beautiful is that.  I have a pansy in this series on its way and a love in the mist one as well.  I think the three together will look so very beautiful indeed. 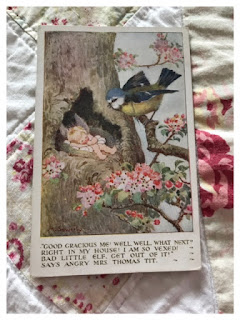 Then I bought this one  which is a beautiful card with a elf/fairy  asleep in a nest and the Mumma bird (Mrs Thomas Tit as it says in the poem) left wondering what on earth is going on and I fell in love with the little rhyme too.  There is a series of these apparently and I think it is called babes in the wood but I may be wrong.

I am going to keep a look out for a couple more of this series or at least another one to frame with this one .... 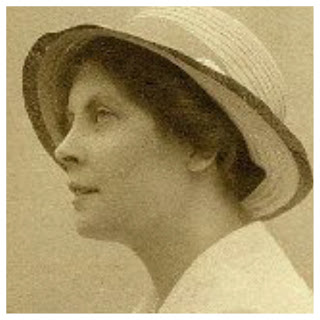 I found two rare photos of the sisters Sowerby  well one is a photo and the other is a picture of a
painting of the other sister and it took some searching I can tell you.  I am fascinated by them and their art.
Amy Millicent Sowerby (1878–1967), known as Millicent Sowerby, was an English painter and illustrator, known for her illustrations of classic children's stories such as Alice's Adventures in Wonderland and A Child's Garden of verses her postcards featuring children, nursery rhymes, and Shakespeare scenes, and children's books created with her sister Githa. 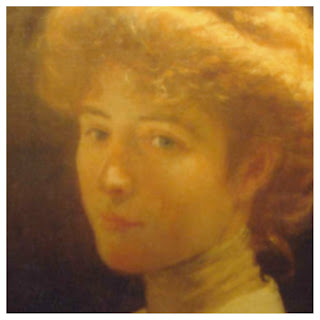 Sowerby, was an English playwright, children's writer, and member of the Fabian Society. A feminist, she was well-known during the early twentieth century for her 1912 hit play Rutherford & Son , but lapsed into obscurity in later decades.
Rutherford & Son was first revived in 1980, and since then there have been several productions, including one at the Royal National Theatre  in 1994 and, most recently, by Northern Broadsides . A biography of Sowerby by Pat Riley, Looking for Githa, appeared in 2009. In addition to several plays, Sowerby wrote books of poetry and short stories for children, illustrated by her sister Millicent.   Her papers and memorabilia are in the collections at the Tyne and Wear Archives and I would not mind having a look at those one day .... 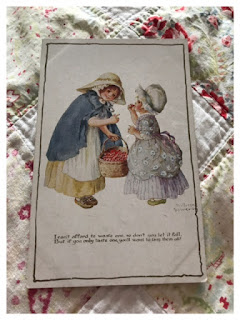 I have one other postcard which has arrived which is this beautiful one and a little different to the
others but I just loved it . It is about trying cherries that are for sale but saying they are so sweet and juicy you will want to buy them all.... I loved the clothes they are wearing and so I think this will be framed on its own  and what a joy to look at.  At  this rate I will need more wall space in my sewing room .....

As you can see I am busy collecting more things to go in my wonderful girl cave but  I have to be careful or my new found space will become a built up area again.  I am doing some inspiration packs to sell of fabrics that I have used or patchwork pieces and will be putting them on Facebook for sale on Homespun Stitchworks page if any one is interested it will be a few weeks time I think .. well when the room is completed and I can then make them up and photograph them.

Well that is it for today and I hope that you all have a wonderful weekend.  I will be taking photos at Eridge but will have to collate them to show you so it will be later next week.  I will however be back here on Monday so until then  Happy Stitching! XX 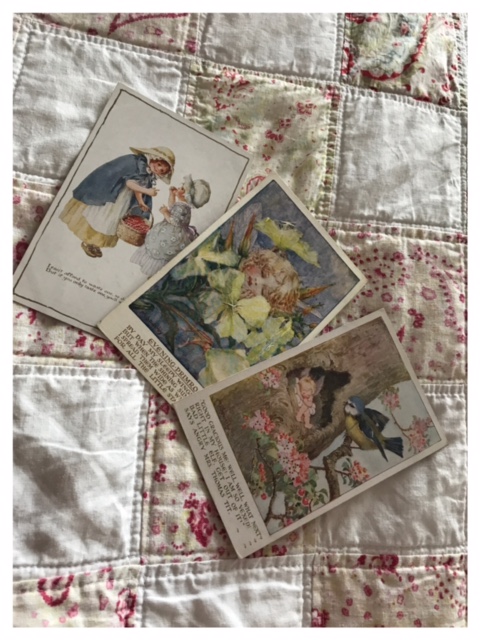