Lucy Locket lost her pocket
Kitty Fisher found it
Not a penny was there in it
Only ribbon round it.

Have any of you seen antique pockets?  They were so pretty it seemed such a shame to hide them in 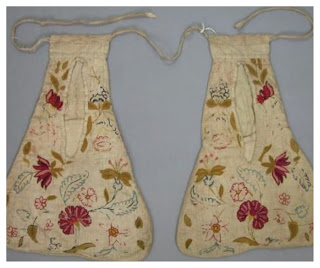 petticoats but it was a necessary thing to do to keep them safe and of course keep your secret things away from prying eyes ... most of the time!

Pockets as we know them today were not the same when they began being made around the 17th Century.  Men always had pockets in their Coats, Waistcoats and breeches but not so in  the dresses that were worn.

Woman from the 17th Century to the late 19th Century had at least one pair of them, which served as 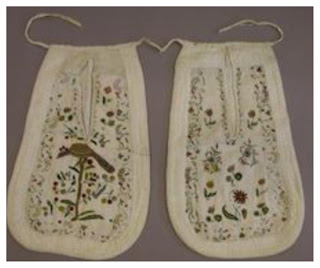 a similar purpose of say a handbag today.  They were usually worn underneath their petticoats.  They had ties which were secured around their waist.  How did they get their hand in their pockets, well petticoats had openings in the side seam so ladies could put their hands through and reach their pocket.  The pockets were invisible but accessible.

It  was the one place that you could keep things that you did not want anyone else to see like a love letter or diary.  Hankies may have been carried in there and of course money.  There was a lady called Theresa Tidy and she wrote Eighteen Maxims of Neatness and Order in 1819 and she suggested that

' It is also expedient to carry about your purse, a thimble, pincushion, pencil, knife and a pair of scissors, which will not only be an independence, by removing the necessity of borrowing but will secure the privilege of not lending these indispensable articles'

Many pockets were handmade and decorated beautifully.  They were often given as gifts.  Some were made to match a petticoat and some were made from old textiles or clothes.

However the word pick pocket derived from the 18th and 19th Century as thieves would removed items such as wallets from men's waistcoats and cut the string from ladies pockets.  There is a record from The Old Bailey Courthouse of pick pockets prosecutions.

Robert Draw of London, labourer was indicated for privately stealing from Martha Peacock a 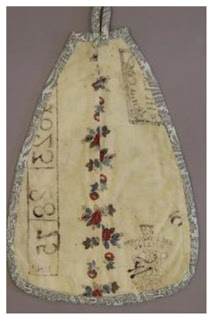 The prosecutor depos'd that as she was going along the street the prisoner came behind her and thrust his hand up her riding hood and pulled her pocket off.  That upon her crying out, he was followed and knocked down and the pocket found upon him.  The prisoner deny'd the fact, but the jury found him guilty to the value of 10 pence.  OBP 5 November 1716 Robert Draw (t1716110531)

As you can imagine pockets were not  tiny they were quiet big and could get a lot of booty in them!

Many people would put their pockets under their pillow at night for safe keeping but even then there are documents at the Old Bailey of a Ann Grey testifying against a Mary Stewart for taking a pocket from under a pillow!

When the fashion changed from full petticoats to wide hoops in the 1790's that the pockets would ruin the dress line so ladies started to  use reticules, which were decorative bags designed to carry over your arm in the manner of our contemporary handbag.  However reticules were very small with barely enough room for a hankie and a coin, never mind a mirror, keys, diary or needle cases normally contained  within a pocket.  Contemporary literature  on proper behaviour suggest that

By the 1850's to the 1890's patterns for dresses show that although pockets were now attached to the skirt they still followed the traditional shape of the separate pocket.

The older style separate pockets were so beautiful, that is if you were of money, with ornate embroidery and so pretty it was a shame in my humble opinion to hide them under petticoats at all.  This of course was the only way to keep them a little safe and secure as I said at the beginning - most of the time anyway.

I would love to find a antique pocket with embroidery but I would imagine most are in a museum now but how wonderful to have a beautiful piece of history with such a gorgeous history.  You could only imagine what may have been lovingly stored within.  A romantic letter from a secret beau or a tiny poetry book and of course the all important sewing kit that we all would covet today.

Anyway that is it for today I really hope you have enjoyed this stitchery history lesson on gorgeous hand embroidered pockets.

Have a wonderful weekend and I will be back here on Monday.  Next week will see some dates for your diaries for vintage fairs and a great give away so until then Happy Stitching! XX

Posted by Sarah Hawkings at 23:53
Email ThisBlogThis!Share to TwitterShare to FacebookShare to Pinterest