Design Days and needles threaded and history of a piece of eiderdown. 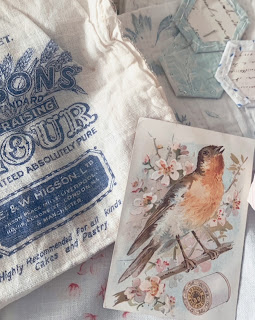 Birds are singing, flowers are appearing from their Winters rest, rain is falling softly and you kind of know that Spring has firmly sprung and the weather is warming up.  It brings the promise of new starts and Summer days to come.  The days are growing longer and the promise of having your dinner in the garden and watching the sun set beautifully over the Dorset countryside.
The little snippets of beautiful vintage fabrics are being eagerly collected by the tiny birds for nest completion is happening here, even fought over the other day by two blackbirds, so nest building and little young ones are on their way soon.
The longer weekend was delightful although not always great weather was just what I needed.  It is lovely to clear your head and have some days doing other things.  Not that we are out of lockdown just yet but its on the horizon.  A little food shopping is exciting right now as you are out.  Days off mean I could go to little artisan shops in stead with no 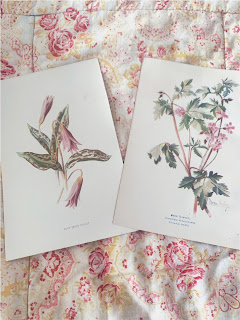 clock watching and to hopefully keep them in business in these trying times.
This week is a shorter one again and I have written a little list of things I would  like to achieve, it does not pressure me, quiet the opposite it makes me happy when I can cross a few things off and makes me feel happy that somethings have been completed.
I did manage to go to a few garden centres and buy some pots and also some flowers and more herbs for the building of my tiny cottage garden.  I would like to sit out there in the summer with the glorious scents of herbs and scented flowers, another place to stitch on warm days and watch the birds and bumble bees go about their busy day.
Herbs in the border now are as follows Rosemary, Green Basil. Red Basil, Mint, Parsley, Coriander, Chives, Sage, Thyme Oregano, Tarragon and Chamomile.  Then edible flower throughout which include tiny Cornflowers, Nasturtuims (variety Ladybird Rose - stunning)
and Hibiscus along with a mix.... Should make for some interesting recipes along with herbal teas fresh in a pot.  I hope you all had a lovely Easter too.  I was in the garden doing some serious weeding and planting and out and about.  Not a needle was picked up and I did have some little easter eggs to munch on... well you only live once!!
I am still enjoying my baking days with tea breads and muffins.  I am going to make a peach cobbler this week at some point and have found a lovely American recipe online. 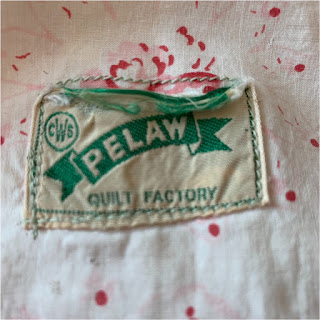 As the weather continues to get better I have planned a few walks ending up at a local
pub or cafe to sit and have a drink before heading back to my dear Thimble Cottage.
Well stitchery talk now and I was truffling about trying to find a gorgeous piece of vintage fabric to back and border a wall hanging I am stitching and I came across the most beautiful piece from an old Eiderdown and suddenly spied the label.
So getting slightly distracted from the object of said truffling, I spied a lovely label and decided to look it up and this is what I found.
Here is an extract from Gateshead Places - Pelaw, the Cooperative Wholesale Society Pelaw Works by Joan Hewitt at www.gatesheadlibraries/gateshead-local-history-/gateshead-places"The vast group of factories which occupied the ground between Shields Road and the railway was established by the Lancashire cooperative movement, to spread the commercial principle of cooperative trading into the North-East at the turn of the century.At first the cooperative movement was entirely made up of retail stores sited in heavily populated industrial areas, particularly in the North of England. In the 1870s a change to manufacturing began, again in Lancashire, round Manchester. The Coop saw the advantage of producing its own goods. Soon it required to expand its manufacturing base, and Tyneside was seen as a splendid place to put up new works.Before the first factory could function, a workforce had to be found and trained, and skilled men came from Lancashire to start this process. There are still families in and around Pelaw today, whose grandfathers came and settled down to work for the rest of their lives in the C.W.S. works.In the clothing factory, women workers at their sewing machines turned out not only shirts, nightwear, underwear, coats and suits, but also industrial clothing - overalls, boiler-suits, and pit clothes. A memo on this last read "In the North-east, so strong is the tradition, that men’s pit-drawers of flannel kersey are still in use and must be supplied."Pelaw’s famous Down Quilts were first made in 1914, in the Quilt factory. Again the workers were women. They were clever quilters, probably because here in County Durham there was an ancient tradition of quilting, and the skills thus acquired were drawn on for the Pelaw workforce. But the Durham quilts though popular, were later eclipsed by the Eiderdowns, filled with the soft, warm and light down feathers of the eider duck. The covers were in satins and silks of deep, lustrous colours and strong patterns.The Pelaw Quilt factory had its own buyers, who travelled the world to find the finest materials. Its first year’s output realised £396, and in 1933, so great was the demand, the factory was enlarged and the staff increased. In 1938, its total sales were over £90,000. Not only were eiderdowns made, but there was a thriving service in the recovering of old eiderdowns originally made there. Some people still have them! In the Second World War the quilting works made uniforms and flying suits.The tailoring factory grew like the others, and was extended twice, in 1933 and 1937. The women who worked there were all expert machinists and tailoresses. All the female workers were paid less than the male staff, as was the general rule. There were wage disputes at times even in this benevolent regime.One would suppose that this vast and busy works would continue to progress and expand after the War when demand for goods returned, and prosperity was much improved. It proved not to be the case. As the 1960s passed, the Coop fell behind its competitors in both retailing and manufacturing. It was slow to see the potential of supermarkets, and did not modernise its production methods soon enough, losing a large share of the market.Some say that its employees were busy looking after themselves rather than customers. Others assert that the management was too old-fashioned and the goods likewise. Retail Cooperative societies began to amalgamate or disappear, and membership fell. A general decline began which in the 1970s greatly accelerated and by 1980 most of the factories were closed, a sad blow to the district which had for so long taken it for granted. The printing works gave up in 1993, but still stands forlorn and battered by vandals. In 1998 only the Shirt Factory is alive. The other buildings have been demolished and in part replaced with private houses and an Aldi supermarket.
...

I thought is so very interesting that I wanted to share this with you to read. My dear little piece of gorgeous eiderdown fabric was made here in the 1940/50's and here it is now been cut up ( likely too worn to use as an eiderdown anymore with holes producing brown feathers everywhere) and in my stash so worn, weathered, softened and very much loved. 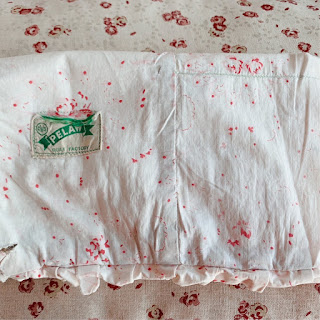 So although I adore this piece of fabric it may now be used to make a little cushion with the label on it, such a piece of history should not be cut up anymore than it has been in my humble opinion.  It is double sided and just needs some stitching unpicked to do so.  What are your thoughts?
Well that is it for me today, some serious stitchery needs to take place so I think I will turn on the radio and listen to something or other and happily immerse myself in vintage goodies..
I will be back on Friday so until then HAPPY STITCHING and take care.
Sarah
X
Posted by Sarah Hawkings at 02:50
Email ThisBlogThis!Share to TwitterShare to FacebookShare to Pinterest