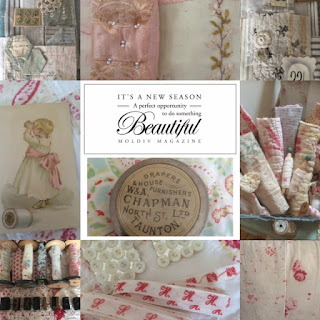 Well it is good to be back.  This week back started for me at the weekend when I went to a the Love Lane Vintage Spring fair in Midhurst, West Sussex on Saturday.  I will be reporting on it for you all but as usual there is the collating of all the photos first.

Today though I would like to firstly say thank you for all your lovely comments and for saying that you missed my ramblings both on here, Instagram and Facebook it was really lovely and it made me smile.  I am having a go at being on here four days a week but of course if there is a big problem then I will be absent on ocassion's so forgive me but at least you all know why now. 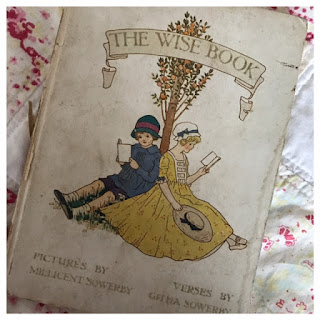 A while ago I picked up this dear little book and I have not really had time to read it properly and look through but I did this weekend and I am so pleased with it.  It is a little old book with wise
words and gorgeous illustrations .....

I actually found this little gem at the Cowslip Christmas fair back last year and it was presented in a little bag.  I had a quick flick through and decided to purchase it but it was not until sorting through some things in my sewing room ( yes it has started in earnest a few hours here and there - at the moment I do not have time to throw 2 days at it and I think that is what it would take) I decided before it went on the book shelf I would give it a good read, it is only a little book after all. 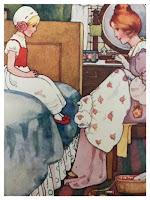 Loving the 'wise words' and the pictures to go with them and it sort of has a moral too I think it is truly delightful.  There of course were thoughts
running through my head then.  In book form will it really be seen?  Should I break it down and frame each one for a wall in my sewing room?  But I love books too and if they are not falling apart it would break my heart to dismember this little beauty ... When we finally move it could just be on the side to flick through for anyone who is there ...... Of course that is what will happen because I really do not think I could destroy such a lovely thing.  I have never seen this before or since so not sure how rare it is. 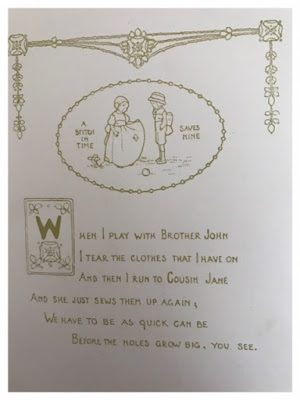 favourite with her little hands placed just so and patiently observing .... First you think it is her Mum but when you read the poem you see the little girl has chosen to run for help to someone who will not scold her!

The words on the next page are lovely because there is a little poem of what has happened then the wise words are at the top of the page, in this case 'A stitch in time saves nine'

When I play with brother John
I tear the clothes that I have on and then I run to Cousin Jane, and she just sews them up again.  We have to be as quick can be, before the holes grow big ... you see!


Further investigation into Millicent Sowerby and I was amazed at all the  little books that have been published.  Then there is another member of the family who illustrates them it seems Githa Sowerby her Sister.

This is what I found out about the Sowerby's.... from Google ...

Amy Millicent Sowerby (1878–1967), known as Millicent Sowerby, was an English painter and illustrator, known for her illustrations of classic children's stories such as Alice's Adventures in Wonderland and A Child's Garden of Verses, her postcards featuring children, nursery rhymes, and Shakespeare scenes, and children's books created with her sister Githa Sowerby.
Sowerby was born in Gateshead, England in 1878 to John G. Sowerby, artist and grandson of naturalist James Sowerby, and Amy Margaret Sowerby (née Hewison). Sowerby was the fourth in a family of six children, including sisters Helen and Katherine Githa. The family eventually settled in Sutton Courtenay. Millicent took some art classes in Newcastle upon Tyne but was largely self-taught. She initially studied watercolours and landscape painting, before becoming influenced by the work of artists such as Thomas Crane and Kate Greenaway and the Arts and Crafts movement, and pursuing postcard and children's illustration as well as landscapes in oil and watercolours.[ Her postcard series "Postcards for the Little Ones" was quite popular, consistently selling thousands of copies.
Sowerby was among the earliest women to illustrate Lewis Carroll's Alice's Adventure's in Wonderland, originally published in 1865. In 1907, the book entered the public domain in the United Kingdom, and at least 8 new editions were published that year, with Sowerby's being the first of the new lot to appear. A collective review in The Academy of the 1907 editions – while regarding her rendition of the mad-hatter's tea party her best illustration, and Father William replying to his son her best use of colour – opined "Sowerby attempts work rather too difficult for her, and she has not much imagination". Her artwork in Childhood, written by her sister Githa, however, was regarded as "much better" than her work in Alice: "The bistre drawings have a charming effect, and [Sowerby] has a pretty fancy." Her illustrations of Robert Louis Stevenson's A Child's Garden of Verses were received as "characteristically excellent", and a 1911 review of three books produced with Githa proclaimed "Millicent Sowerby is Kate Greenaway come to life again." 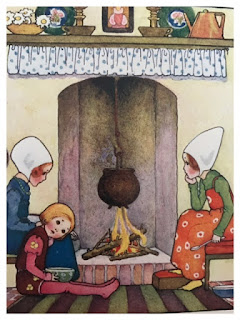 Millicent remained unmarried, and continued to paint into her 80s. She died in 1967 at the age of 89

So you see this dear little book should not be broken up and framed but stay as a whole as Millicent would have wanted me to do.  I am enthralled by her work and will now actively look for some more of her dear little books for my collection.

I think you can all guess what these wise words are going to be but the little poem is lovely ... have a read of this 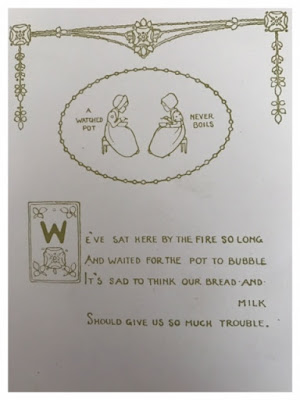 We've sat here by the fire so long and waited for the
the pot to bubble.  It's sad to think our bread and milk.
Should give us so much trouble!

Today I am going for a little visit to my Mum has she had an unsettled weekend and I think it is because of our absence, this is what we were told that if we continued to go daily she would see us as carers which would not do her or us any good.  If we do not leave her a day or two at a time she will 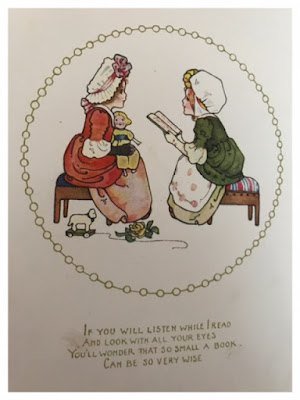 always be unsettled which will be sorrowful for her and means that if we ever went on holiday or we were unwell she would just go mad again.  Then she would never be able to go in to the lovely care home we have chosen for her after her hospital stay...... So I will go with my Sister at 11 this morning and be back for an afternoon of ........ STITCHING Yayyyyyy!  all being equal.

We are to say now that we are going home when we leave but we will be back ... give no time or date because they do not understand it and never say I will see you tomorrow.... This has been a huge learning curve for us but hopefully over the next few weeks with this new routine she will settle down.

I have to finish a Christmas sampler before I start afresh ... can you believe it!  The weeks have flown with all this going on and turned into months!

Hoping to get to look through my design book later this evening to decide on what to do next and make up some design baskets .... Oooh talking of baskets I might have bought two more over the weekend.  More about that later in the week.

Give away time will be coming up too so watch this space.

Have a good day whatever you are up to and as always Happy Stitching! XX